Vicente del Bosque's men have come in for some criticism for their lack of cutting edge in recent games but the team would want to change the perception and book a berth in the World Cup. 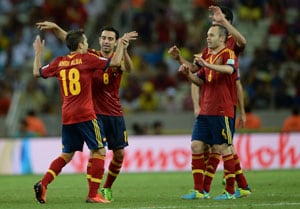 World champions Spain can seal their place in next year's World Cup in Brazil with just a point when they host Georgia in Albacete on Tuesday.

The task appears a simple one against a side ranked 97 in the world given La Roja have never lost a World Cup qualifier on home soil.

However, despite weaving a relatively comfortable passage through a tricky group that includes 1998 world champions France, Vicente del Bosque's men have come in for some criticism for their lack of cutting edge in recent games.

Friday's 2-1 win over Belarus did little to convince the doubters with Spain producing just three shots on target throughout the 90 minutes.

Del Bosque sprung a surprise by starting Michu up front on his debut against the Belarussians, but it wasn't until Manchester City striker Alvaro Negredo was introduced that they started to pose a more serious threat.

And after Xavi had given the hosts the lead, it was Negredo who headed home his third goal in four internationals this season to make the game safe 15 minutes from time.

That goal took Negredo's overall tally for his country to nine in just 18 games at a very impressive strike rate of a goal every 78 minutes.

And Del Bosque is expected to hand him a rare start in a competitive international as he looks to wrap up qualification in style.

"It is very difficult in the national team, there are many good players and that is why when we go out onto the field we all give everything," he said.

"Sometimes it goes well, sometimes it doesn't. The truth is in the last few games I have had good luck and I need to take advantage of that."

Spain needed a 85th minute winner from Roberto Soldado to beat Georgia in their opening game in the group last September.

And while Negredo admits his side have had trouble breaking down limited teams recently, he believes their tried and trusted short passing style is still the best way forward.

"It will be difficult because Georgia will stick 11 players in their half, but we have a way of playing we need to maintain," said Negredo.

"Despite the fact that many games have become more difficult for us, there are very few games we haven't won. We need to keep the ball and take advantage of the chances we have."

Del Bosque's patience with Iker Casillas' lack of first-team action at Real Madrid ran out on Friday as Victor Valdes replaced the 32-year-old in goal and now seems certain to retain his place until Casillas' position as back-up to Diego Lopez at Real changes.

Andres Iniesta should though return to the starting line-up after he only featured as a second-half substitute on Friday due to a slight muscular problem.

And there could even be a change at centre-back as Gerard Pique finished the Belarus game struggling with a minor injury so Inigo Martinez may get his first taste of competitive international action.

Comments
Topics mentioned in this article
Football Sevilla Spain Rafael Nadal Italy Andres Iniesta Alvaro Negredo Lionel Messi
Get the latest updates on ICC T20 Worldcup 2022 and CWG 2022 check out the Schedule, Live Score and Medals Tally. Like us on Facebook or follow us on Twitter for more sports updates. You can also download the NDTV Cricket app for Android or iOS.