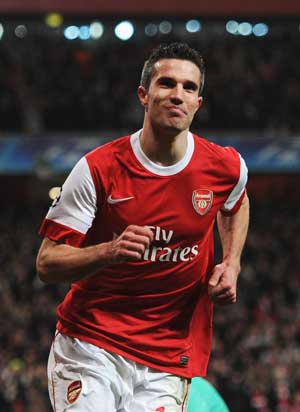 The Frenchman - who has seen Arsenal lose to Barcelona in the 2006 final and in the quarter-finals last year - was referring to the surprise inclusion of Dutch forward Robin van Persie in the squad after he was ruled out last week because of injury.

Arsenal lead 2-1 from the first leg at the Emirates but they will have last season's quarter-final fresh in their memories where they drew 2-2 at home but were demolished 4-1 in the second leg with Leo Messi scoring all four goals.

"He (Van Persie) is here as a player with a possibility of taking part. We have 19 players and the squad has not yet been decided," said Wenger who denied that other injured players such as Theo Walcott or Alex Song would make dramatic comebacks.

"He has made quick progress over the last few days and this morning he had tests as he really wanted to play and we will see how he is in the morning (Tuesday).

"This is not mind games, I am not good at them. I really want him to play but only if he is 100 percent fit. With Van Persie he has had a ligament problem which is different to a muscular injury and so the risk is a lot less of himself doing damage.

Spanish playmaker Cesc Fabregas missed the game at the Nou Camp last season but is now expected to play after overcoming a hamstring strain.

There is plenty attention on him from the local press as he returns to his home town but he denies that he is looking at the game differently from any other.

"I have been feeling fine for the last few days and so I am okay to play. We want to win this game for our club and nothing else," said Fabregas, who has been a transfer target for Barcelona where he came through the youth ranks before leaving for the Gunners.

"I am not here to try and shut people up but purely to win for Arsenal and then move on.

"It is a special occasion for all the people who will be here in the stadium but it will be just one more match and I will be giving my all so that we go through.

"We showed what we can do in the first leg and we have not come just to defend as we are a big club and we need to play our own game.

"Last season if we had managed to keep hold of our 1-0 lead for longer then you never know what might have happened as they would have got nervous but instead Messi scored four outstanding goals."

Comments
Topics mentioned in this article
Football Liverpool Arsenal
Get the latest updates on ICC T20 Worldcup 2022 and CWG 2022 check out the Schedule, Live Score and Medals Tally. Like us on Facebook or follow us on Twitter for more sports updates. You can also download the NDTV Cricket app for Android or iOS.