Arsene Wenger has revealed Arsenal have started negotiations with French internationals Samir Nasri and Gael Clichy to extend their contracts with the Premier League club. 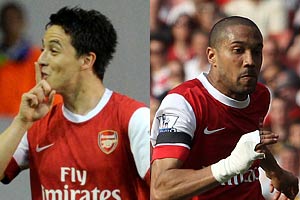 Arsene Wenger has revealed Arsenal have started negotiations with French internationals Samir Nasri and Gael Clichy to extend their contracts with the Premier League club.

Nasri and Clichy are moving towards the final year of their current deals and Wenger is determined to keep both players at the Emirates Stadium even though they have been linked with moves to clubs in Italy and Spain.

Wenger wants to build his team around the likes of Nasri, Clichy, Cesc Fabregas and Jack Wilshere as he tries to improve a squad that once again looks set to finish without a trophy.

"We are talking to Nasri and his agent already and we have the same situation with Clichy. We have agreed to speak about it during the summer," Wenger said.

"When you sign a contract for four or five years, you are committed through your contract to win trophies with the club where you sign.

"It is in no contract that if you do not win a trophy the first year, you can leave."

Comments
Topics mentioned in this article
Football Arsenal Samir Nasri Gael Clichy
Get the latest Cricket news, check out the India cricket schedule, Cricket live score . Like us on Facebook or follow us on Twitter for more sports updates. You can also download the NDTV Cricket app for Android or iOS.