Manchester United striker Wayne Rooney and goalkeeper David de Gea both trained on Monday ahead of Tuesday's Champions League match away to Galatasaray. 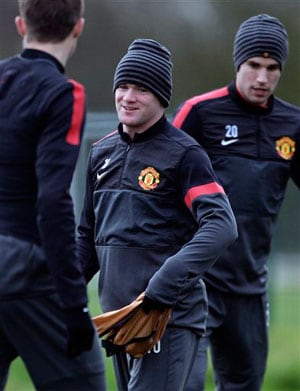 Manchester United striker Wayne Rooney and goalkeeper David de Gea both trained on Monday ahead of Tuesday's Champions League match away to Galatasaray.

Rooney missed the shock weekend Premier League defeat by Norwich with tonsillitis while de Gea took no part as he was having his wisdom teeth removed.

However, both players featured in a training session ahead of United's trip to Turkey.

But midfielders Shinji Kagawa and Nani and defender Jonny Evans -- struggling with knee, hamstring and groin injuries respectively -- were all absent for the first 15 minutes of the session that was open to the media.

United manager Alex Ferguson is set to give a number of first team regulars a break in Turkey with the club already having qualified for the knockout phase of the Champions League.

However, midfielder Michael Carrick promised there would be no complacency come the knockout phase, where United have reached three finals, a semi-final and a quarter-final on the last five occasions they have gone beyond the group stage, irrespective of whether they got a 'kind' draw.

"You can drive yourself mad thinking about who you might get and all the various permutations," he said. "We just have to win our games, which we have done, and see what the draw gives us.

Looking ahead to the knockout stages, Carrick added: "That is the big test. That is when the competition really comes alive.

"We have done the first part. The second one is when we get the really big European nights and we go away to the best places in Europe and win games.

"We have managed to do that very well over the past few years. Hopefully we can get back to that."

United crashed out at the group stage last season but have won all four of their pool matches so far, even though they have been behind in three of those games, with Carrick's goal ensuring Galastasaray were beaten at Old Trafford.

"It is a happier place because of what we are doing in the Champions League," he said.

"Last year we were chasing our tails a bit and came up short. This year we have been ahead of the game.

"Getting those wins and points on the board makes it an awful lot easier."

Comments
Topics mentioned in this article
Football Manchester United Michael Carrick Chelsea David De Gea Galatasaray
Get the latest Cricket news, check out the India cricket schedule, Cricket live score . Like us on Facebook or follow us on Twitter for more sports updates. You can also download the NDTV Cricket app for Android or iOS.