Pierre-Emerick Aubameyang scored with a sensational bicycle kick and had a chance to seal the tie with the final kick of the game, but somehow fired wide from six yards out. 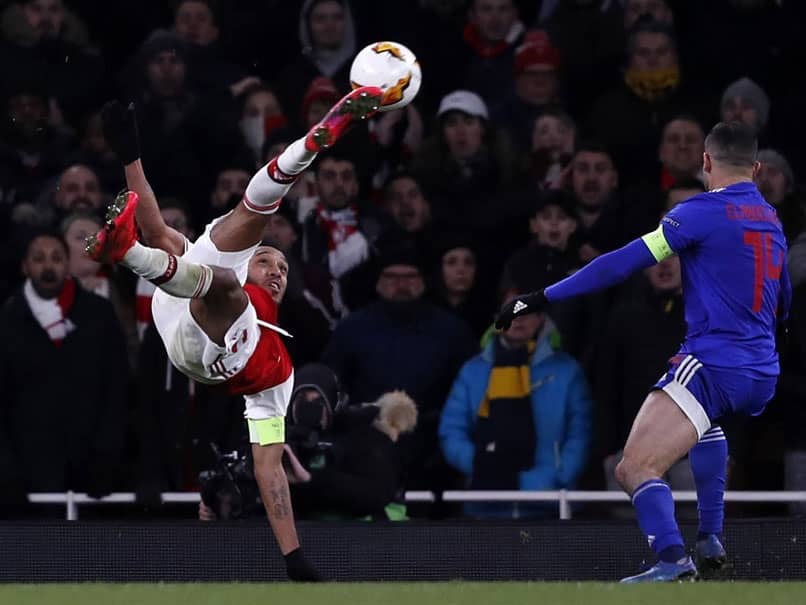 Pierre-Emerick Aubameyang turned from hero to zero in the space of minutes in what turned out to be a disastrous night for Arsenal in the Europa League. The Premier League outfit were dumped out Greece's Olympiacos on a night when four former European champions were eliminated. Pierre-Emerick Aubameyang struck for Arsenal, putting them back in front with a spectacular bicycle kick after Olympiacos defender Pape Abou Cisse had headed in a corner after 53 minutes. Youssef El-Arabi scored in the last minute of extra-time to put the Greeks back in front on away goals. However, pretty much with the final kick of the game, Aubameyang had the goal at his mercy six yards out but somehow fired wide.

"Very hard, very tough," said Aubameyang. "Their last-minute goal was unlucky for us."

The Gabonese striker's bicycle kick as well as his shocking miss became the talk of the town on Twitter with videos going viral.

Good lord, what a goal from Aubameyang pic.twitter.com/IWdbBvLQYi

Arsenal had won the first leg of the round of 32 tie 1-0 in Greece.

On Thursday night, Defender Pape Abou Cisse cancelled out that advantage when he headed in a corner after 53 minutes.

Arsenal could not break through and were forced to extra time.

Giorgos Masouras hit the bar for Olympiacos in the 112th minute and a minute later Pierre-Emerick Aubameyang struck for Arsenal, putting them back in front with a spectacular bicycle kick.

However, in the final minute of extra time, Arsenal cleared an Olympiacos corner but were still disorganised when the ball was swung back into the area.

The cross found El Arabi free in front of goal for an unchallenged shot.

Olympiacos Pierre-Emerick Aubameyang Football
Get the latest updates on IPL 2020, check out the IPL Schedule for 2020 and Indian Premier League (IPL) Cricket live score . Like us on Facebook or follow us on Twitter for more sports updates. You can also download the NDTV Cricket app for Android or iOS.