Chelsea booked their place in the Champions League quarter-finals despite wasting a host of chances in Wednesday's 0-0 draw against Copenhagen in the last 16 second leg match at Stamford Bridge. 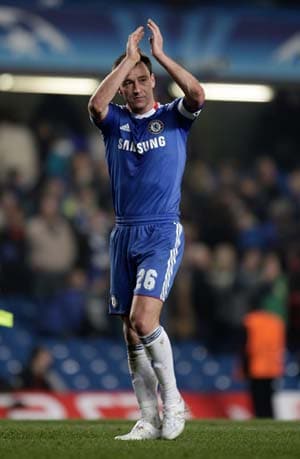 Chelsea booked their place in the Champions League quarter-finals despite wasting a host of chances in Wednesday's 0-0 draw against Copenhagen in the last 16 second leg match at Stamford Bridge.

Carlo Ancelotti's side went through 2-0 on aggregate and their first leg victory in Denmark meant they were never likely to rue some woeful finishing.

But far sterner tests lie in wait on the road to Wembley and there will have to be a significant improvement if the Blues are to reach the final.

After three successive wins, Ancelotti must be concerned that his team returned to the kind of flawed display that has been the hallmark of Chelsea's inconsistent campaign.

Nicolas Anelka's brace in the first leg had put Chelsea within touching distance of the last eight and Ancelotti clearly felt the job was all but done as he left Fernando Torres, Michael Essien and Florent Malouda on the bench.

Chelsea had lost just one of their previous 25 home matches in the Champions League, so it was hardly surprising that Copenhagen coach Stale Solbakken admitted his side would need a miracle to go through.

The only miracle in the first half was how Chelsea failed to put the tie completely beyond Copenhagen's reach.

Fabio Capello's move to reappoint John Terry as England skipper in place of Rio Ferdinand was given a resounding endorsement from the Chelsea fans who hailed their defender with chants of "there's only one England captain".

But Terry had few chances to show his leadership qualities as Copenhagen's bright pink shirts left more of an impression than the players wearing it.

Ancelotti's side created and then squandered chances from the start, with Frank Lampard and Ashley Cole both shooting wide when they should have at least tested Copenhagen goalkeeper Johan Wiland.

Yuri Zhirkov had an even better chance to open the scoring after Didier Drogba's clever back-heel and Cole's pass carved open the Copenhagen defence, but the Russian winger curled his shot wide.

Zhirkov almost made amends when he collected Ramires's sublime cross-field pass and slipped a perfectly weighted ball through to Anelka, whose shot lacked the power to beat Wiland from a tight angle.

After spending 25 minutes penned into their own half, Copenhagen were agonisingly close to taking a shock lead when Dame N'Doye's whipped free-kick caught Petr Cech moving the wrong way and cannoned to safety off a post.

The Danish defence was pierced moments later but Zhirkov was having a night to forget in front of goal and he was off-target from close-range after Anelka crossed from the touch-line.

Drogba fared little better when the Ivorian volleyed wide from Jose Bosingwa's deep cross early in the second half.

John Obi Mikel had Chelsea's closest effort when he hit the crossbar after Terry and Anelka flicked on Lampard's corner.

But Chelsea's profligacy spread to Anelka, who was twice played in by Drogba, only to dwell on the ball and give Copenhagen time to clear the danger.

Torres, who had failed to score in five appearances since his £50 million move from Liverpool, was finally sent on to replace Anelka with 20 minutes to play.

The Spaniard nearly made an immediate impact with a deflected shot that looped just wide.

Torres also burst into the penalty area and forced Wiland into action with a rising drive, but his wait for a goal continues.

Comments
Topics mentioned in this article
Samantha Stosur Football Chelsea
Get the latest updates on ICC T20 Worldcup 2022 and CWG 2022 check out the Schedule, Live Score and Medals Tally. Like us on Facebook or follow us on Twitter for more sports updates. You can also download the NDTV Cricket app for Android or iOS.