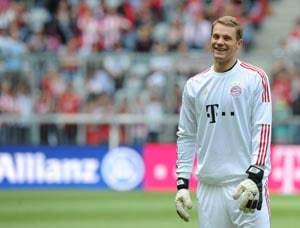 The deal was agreed by the two clubs in April, but Putin, who is heavily linked to Schalke's main sponsor, Russian gas company Gazprom, approached Schalke about doing everything possible to make Neuer stay.

"He (Putin) was absolutely besotted with Manuel and is a huge fan of his," Schalke's Toennies told German magazine Sport-Bild.

"He asked me to do everything we could to keep Manuel."

Neuer was under contract with Schalke until June 2012, but having held a news conference in April to say he would not be extending his stay in Gelsenkirchen, Schalke were powerless to prevent him from leaving.

Had the Royal Blues not sold him to Bayern last summer, they would have risked losing Germany's first-choice goalkeeper on a free transfer when his contract expired and Neuer had made it clear he wanted to leave.

"For Manuel, it was no longer a question of money - we had to accept that," said Toennies. "It shows what an impeccable character he has. He wanted to change."

Neuer endured a chorus of whistles, jeers and obscene gestures from furious Schalke fans in September on his return to Gelsenkirchen with Bayern, who won 2-0.

Former top referee Markus Merk, who is now a pundit, was also the victim of abuse from fans at the stadium recently, when he was pelted with lighters and sprayed with beer.

Merk has been unpopular with Schalke fans since 2001, when Bayern won the league title with a goal from a free-kick he awarded in injury time against Hamburg that snatched the title from Schalke on the last day of the season.

But the behaviour of Schalke's fans is of concern to Toennies.

"We must take care that the good reputation of the Schalke fans will not be lost," he said.

Comments
Topics mentioned in this article
Football Manuel Neuer Shinji Okazaki Borussia Dortmund Bayern Munchen FC Schalke 04
Get the latest updates on IND vs NZ 2021, check out the Schedule and Live Score . Like us on Facebook or follow us on Twitter for more sports updates. You can also download the NDTV Cricket app for Android or iOS.