The French government relaxed the health protocols before the weekend to allow for a total attendance of 5,000, including players, journalists and staff, at games. 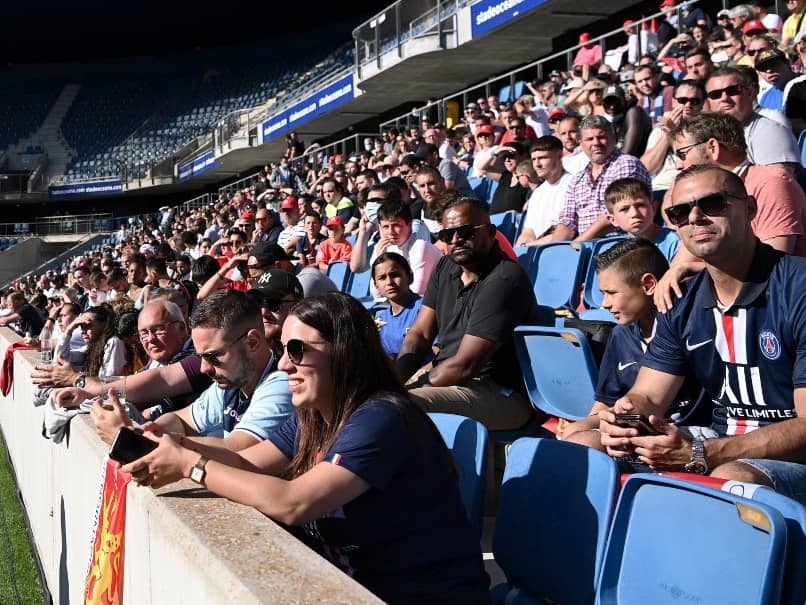 The friendly match between PSG and Le Havre drew a big crowd.© AFP

Paris Saint-Germain routed second division Le Havre in a friendly on Sunday remarkable not for the 9-0 score, but because it drew the biggest crowd for a match in one of Europe's 'Big Five' football nations since early March. The French government relaxed the health protocols before the weekend to allow for a total attendance of 5,000, including players, journalists and staff, at games and while the match at Le Havre was not the first to be played, the others involved only lower-division clubs.

"It is a victory for French football, sport in general," said outgoing Sports Minister Roxana Maracineanu who was at the match.

"I am delighted that football in France can resume in a popular way, with more people in the stadiums. It is the only country in western Europe to be able to do this."

Unlike Germany, England, Italy and Spain, France abandoned its league season in the face of the coronavirus pandemic, but when the other four countries resumed their leagues, they did so behind closed doors.

Although social distancing rules were in place, fans took a few liberties once they were in the 25,000-capacity Stade Ocean on Sunday.

"It's a bit like a return to normal life, even if there are some drastic conditions," said Johan Vattier, president of Les Barbarians Havre, the club's biggest supporters group.

"We don't give a damn about PSG, this match is first and foremost a way to get back together with our mates!"

"It's not easy for a group like ours to enforce the rules because we're used to cramming together, but we're going to try to respect them as much as possible," he added.

"We want to start next season with fans in the ground."

Alan, 20, a student in Le Havre, who is a PSG fan, said it had been a dream to finally see his team in the flesh and he had not thought about the health risk.

"When I saw that it was Paris, I didn't even think about it," he said. "Closed-door games on TV are boring."

On the field, Neymar and Mauro Icardi each scored twice and Kylian Mbappe once before PSG made 10 changes leading 5-0 at half time.

Pablo Sarabia, with two, Idrissa Gueye and Arnaud Kalimuendo scored in the first 15 minutes of the second half to complete the rout as PSG started to warm up for a busy few weeks in late July and early August.

"We are back! A friendly that feels like a final with a knot in my stomach," Neymar wrote on Instagram before kick-off.

Both French finals will be at the 80,000-seat Stade de France in Paris.

Maracineanu said the attendance limit would be reviewed on July 18 and would consider adjusting the limit so it was proportional with the size of the stadium.

Paris SG Neymar Kylian Mbappe Football
Get the latest updates on India vs Australia Series, check out the India vs Australia Schedule for 2020-21 and Ind vs Aus live score . Like us on Facebook or follow us on Twitter for more sports updates. You can also download the NDTV Cricket app for Android or iOS.