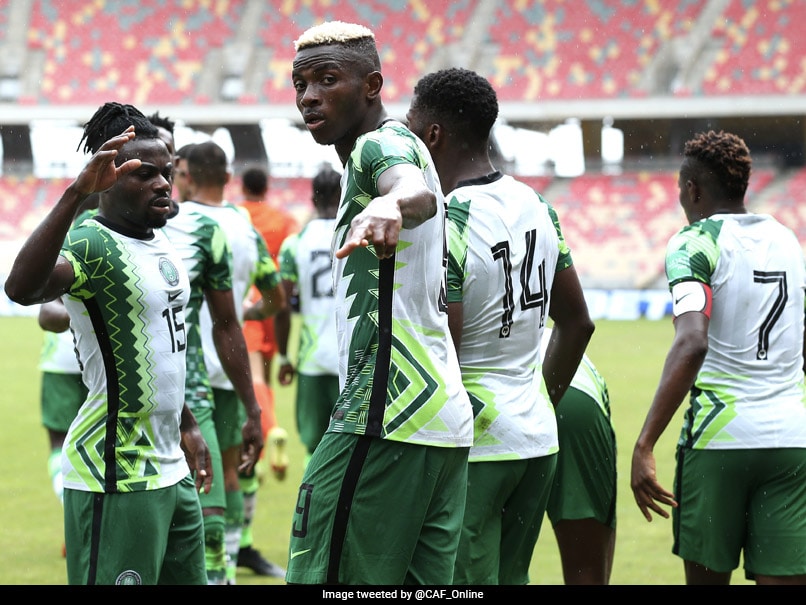 Victor Osimhen is the leading scorer in 2023 AFCON qualifying with five goals.© Twitter

Napoli forward Victor Osimhen scored four goals as Nigeria crushed Sao Tome e Principe 10-0 in Morocco on Monday to record the biggest victory in Africa Cup of Nations (AFCON) qualifying history. Qualifying for the biennial competition has been staged since 1961 and Ghana, Kenya and Libya shared the record with eight-goal victories until Nigeria went on a rampage in the Atlantic resort of Agadir. Nigeria led 3-0 at half-time in the Group A matchday two encounter and the other scorers were Terem Moffi (two), captain Moses Simon, Oghenekaro Etebo, Ademola Lookman and Emmanuel Dennis.

With Nigeria 153 places higher in the world rankings than Sao Tome, a one-sided encounter was expected, but after a fairly competitive first half, the game turned into shooting practice for the Super Eagles.

Nigeria eclipsed their previous highest score in a Cup of Nations qualifier of seven against Burkina Faso in 1991 when now deceased Rashidi Yekini notched four.

It was a home fixture for Sao Tome, but had to be moved to southern Morocco because the tiny island nation does not have an international-standard stadium.

Goalkeeper Anastacio Braganca, one of several home-based Sao Tomeans in the line-up, has conceded 15 goals in two matches after Guinea-Bissau put five past him in matchday one last week.

Osimhen revelled in the space offered by the minnows and is the leading scorer in 2023 AFCON qualifying with five goals, one more than reigning African Footballer of the Year Sadio Mane from Senegal.

Severely injured last year playing for Napoli, Osimhen wore a protective face mask during the first half but discarded it for the second 45 minutes.

The 23-year-old nodded the three-time African champions in front on nine minutes in the near-empty 45,000-seat Grand Stade d'Agadir.

He then created goals for Simon and Moffi before half-time as Nigeria dominated the fourth match under Portuguese coach Jose Peseiro after a win over Sierra Leone and friendly losses to Mexico and Ecuador.

Nigeria scored five more goals in 17 minutes soon after the restart to build an 8-0 advantage midway through the second half.

Osimhen notched the ninth goal six minutes from time and substitute Emmanuel Dennis completed the humiliation of the islanders by converting an added-time penalty.

Sao Tome qualified by edging Mauritius 4-3 on aggregate in a preliminary tie, but were then disqualified by the Confederation of African Football (CAF) because one of the team broke the Covid-19 test rules.

The team, popularly known as The Falcons and True Parrots Team, appealed to a different CAF committee and were reinstated just nine days before their first group game.

Nigeria, title-holders Senegal, Algeria, Burkina Faso, Mali and Morocco won both matches at the start of qualifying for the 2023 tournament in the Ivory Coast.

Guinea-Bissau would have fancied their chances of winning twice as well after Jorginho netted twice within five minutes soon after half-time to build a two-goal lead over Sierra Leone in Conakry.

But the Wild Dogs were reduced to 10 men when Sana Gomes was sent off, Augustus Kargbo halved the deficit and Musa Kamara equalised on 87 minutes to snatch a 2-2 draw.

In Group K, lowly Liberia conceded home advantage to Morocco because they do not have a CAF-approved stadium and, unsurprisingly, fell 2-0 with Faycal Fajr and Youssef En-Nesyri scoring in Casablanca.

Matchdays three and four are scheduled for September 19-27, although Senegal want them postponed so that they and fellow Qatar World Cup qualifiers Cameroon, Ghana, Morocco and Tunisia can play friendlies.

Nigeria Football
Get the latest updates on ICC T20 Worldcup 2022 and CWG 2022 check out the Schedule, Live Score and Medals Tally. Like us on Facebook or follow us on Twitter for more sports updates. You can also download the NDTV Cricket app for Android or iOS.