US group plans to sign Roma deal in next 20 days 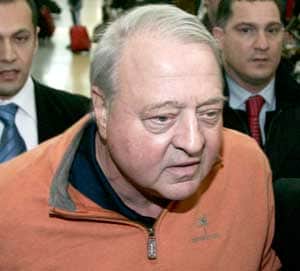 DiBenedetto's group is reportedly prepared to pay 77 million ($109 million) for a 60 percent share of the club. The Unicredit bank, which last year became co-owner of Roma following a debt-for-equity swap with the Sensi family, will retain 40 percent of the club but then sell part of its share to "strategic Italian investors."

"The signature for the agreements is scheduled for within the next 20 days," a joint statement late Tuesday said after days of extensive negotiations in Rome.

Roma shares on the Milan stock exchange fell sharply in midday trading Wednesday, down 6.58 percent at 1.121 ($1.58) per share.

The deal, which will apparently be signed in Boston, would make the four-man American group the first foreign majority owners of a Serie A club.

DiBenedetto is one of approximately 13 limited partners in the Boston Red Sox ownership group. The other members of the group planning to buy Roma are Boston Celtics minority owner James Pallotta, Michael Ruane and Richard D'Amore.

Roma has some of the biggest debt among Italian clubs, with the Gazzetta dello Sport estimating its deficit this year at 40 million ($56 million).

Roma could fall further into debt if it doesn't qualify for next season's Champions League. The team sits sixth in the table, six points short of fourth - with the top four gaining entry to the lucrative competition.

Roma was eliminated from this season's Champions League by Ukrainian side Shakhtar Donetsk this month.

Roma, which last won the Serie A in 2001, has had a tumultuous season, with Vincenzo Montella replacing Claudio Ranieri as coach last month.

However, the club has some of the most dedicated fans in Italy and DiBenedetto has already declared he plans to build a new stadium.

There is also the issue over DiBenedetto's participation in the Fenway Sports Group, which owns Liverpool. UEFA rules prevent ownership of two clubs competing in the same competition and Roma and Liverpool could both qualify for next season's Europa League.

DiBenedetto was greeted by a mass of photographers and reporters when he landed at Rome's Leonardo da Vinci airport Monday, then entered two days of marathon negotiations.