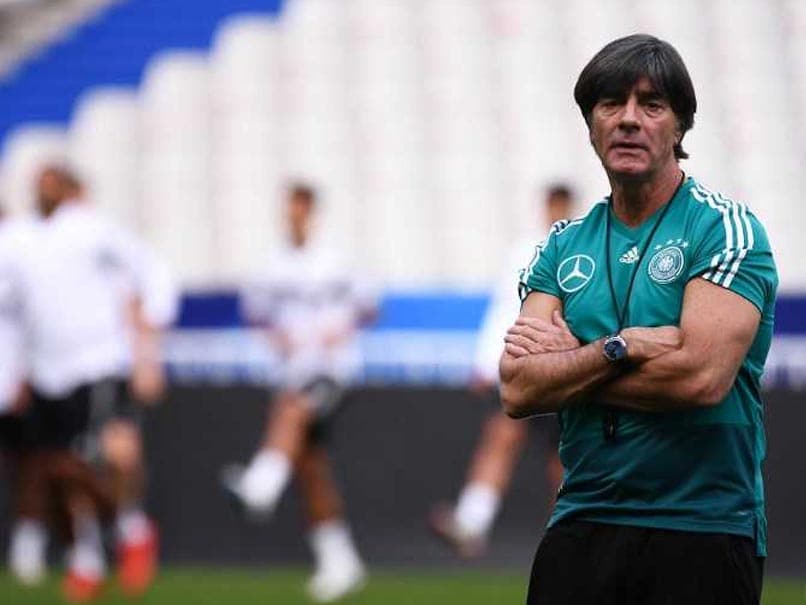 Joachim Loew spoke to the media ahead of Tuesday's Nations League game against France.© AFP

Two days after the latest humiliating defeat, Germany coach Joachim Loew seemed to have regained his poise as he faced the media on Monday ahead of a match against France. "I can handle criticism very well," Loew said at a press conference ahead of Tuesday's Nations League game against the world champions at the Stade de France. After his team lost 0-3 to the Netherlands on Saturday, Loew had seemed irritated and flustered as he refused to answer questions from German media about his future.

That loss left Germany bottom of their Nations League group, fuelling questions about whether he should have retained his job after the humiliating early exit from the World Cup.

"Of course, the defeat in the Netherlands has done a lot of damage, to the staff, the players and most of all the fans," Loew said on Monday.

"It's not really surprising to me. After the World Cup, it is a process we have to manage. There will be setbacks or defeats. I am not too surprised about that.

"It's normal for me to be criticised, but I can handle criticism very well. I've spoken with the president (of the federation), it's clear that we have to stick together.

"Criticism from the outside does not bother me. It is important that I motivate my players against France. I can easily forget the criticism and remain 100 percent focused."

Loew has stayed loyal to players who won the 2014 World Cup even though the likes of Thomas Mueller, Jerome Boateng and Mats Hummels are in nowhere near the form they showed in Brazil.

At 32, and after twice fracturing his foot last year, Manuel Neuer seems no longer a world-class goalkeeper.

Against the Dutch, Boateng and Hummels often left gaps. At the other end, Germany have only scored 10 goals in the last twelve games.

"For the first 30 minutes against the Netherlands we played well. In attack, we had a lot of goal attempts but we lacked the organisation we have had in the past. We have to change things tactically."

Defeat on Tuesday would leave Germany on the verge of relegation to the B division of the Nations League. It would also be a sixth in 2018, a German record in a calendar year.

"We have nothing to lose against the world champions," Loew said. "We are here to take the three points."

"We want to play boldly against the world champions. As for the players, of course, if you suffer a 3-0 defeat, you have to make changes. One thing I can tell you is that Neuer will be in goal... "

France Joachim Loew Football
Get the latest updates on ICC T20 Worldcup 2022 and CWG 2022 check out the Schedule, Live Score and Medals Tally. Like us on Facebook or follow us on Twitter for more sports updates. You can also download the NDTV Cricket app for Android or iOS.