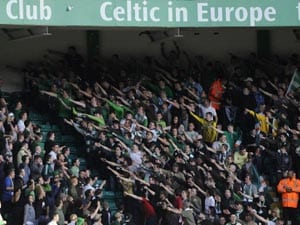 UEFA's control and disciplinary panel fined the Glasgow club after the body's match delegate was informed of what it called "illicit chanting" by a Scottish police official.

Celtic was fined over pro-Irish Republican Army songs. Celtic traditionally draws support from Catholics and those in favor of Irish independence.

The club escaped punishment from the Scottish Premier League following an investigation into the singing of the same songs by a section of the club's fans in October.

Comments
Topics mentioned in this article
Scotland Celtic Football
Get the latest updates on IPL 2020, check out the IPL Schedule for 2020 and Indian Premier League (IPL) Cricket live score . Like us on Facebook or follow us on Twitter for more sports updates. You can also download the NDTV Cricket app for Android or iOS.