Nine-time champions Real Madrid qualified for the Champions League semi-finals here on Wednesday, beating APOEL Nicosia 5-2 in their quarter-final second-leg clash and by 8-2 on aggregate. 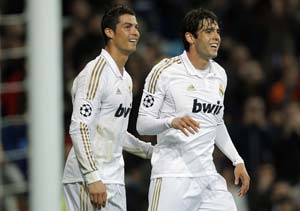 Nine-time champions Real Madrid eased into the Champions League semi-finals here on Wednesday, beating APOEL Nicosia 5-2 in their quarter-final second-leg clash and by 8-2 on aggregate.

A double from Cristiano Ronaldo, along with goals from Kaka, Angel Di Maria and Jose Maria Callejon ensured the Spanish giants will meet Bayern Munich - who beat French side Marseille 2-0 on Tuesday and 4-0 on aggregate - in the final four.

Gustavo Manduca and an Esteban Solari penalty gave the Cypriots some consolation late in the match.

The result was never really in doubt after Real won the first leg 3-0 in Cyprus, but the visitors nevertheless gave a fighting performance on a wet night in the Spanish capital.

APOEL bow out of this season's competition after a memorable run making them the first Cypriot team ever to reach the quarter-final stages.

Real Madrid will go into the Bayern clash with a near perfect record, winning nine out of ten games scoring 32 goals and conceding only six.

APOEL started the game playing very deep looking to frustrate the home team, a tactic that denied Madrid in the first leg until the 77th minute.

Real Madrid, however, were quicker off the mark this time and on two minutes Gonzalo Higuain took advantage of a poorly cleared Ronaldo cross to head just wide.

A defensive error by Savvas Poursaitides three minutes later allowed Ronaldo a clear shot on goal from close range but Urko Pardo, the Spaniard in the APOEL goal, blocked well.

The Cypriots began to settle after those early scares and started to enjoy some possession.

On 20 minutes they made their first attacking foray into enemy territory and Sergio Ramos had to make a timely tackle as Ailton bared down on Iker Casillas in the Real Madrid goal.

Ronaldo went close again on 25 minutes when he headed a Nuri Sahin free-kick over the bar, but a minute later he made no mistake for the opening goal when a Marcelo cross from the left-wing found him unmarked six yards out.

Kaka then tried his luck with a curling right footed drive from 20 yards on 34 minutes that went just high.

However two minutes later from exactly the same position to the left of the area, and five yards further out, he picked his spot perfectly, high to the right, to make it 2-0 to Madrid.

The Brazilian nearly doubled his tally on 40 minutes with a right footed shot that hit the foot of the post and APOEL were relieved to hear the half-time whistle.

Jose Mourinho used the second period to rest various players and give Argentinian Di Maria more than 35 minutes to aid his recuperation from an injury that had kept him out for six weeks.

The Cypriots got their reward for enterprising play on 66 minutes when the Brazilian Gustavo Manduca finished off a tidy move to reduce Madrid's lead.

Captian Constantinos Charalambides then went close for the Cypriots who were enjoying their best spell of the game.

With 14 minutes remaining Ronaldo curled a stunning right-footed free-kick from a wide left position for his eighth goal in this year's competition and two minutes later Callejon made it 4-1 with an unstoppable shot.

Esteban Solari, brother of former Madrid star Santiago, quickly pulled one back for APOEL from the penalty spot before Di Maria finished off the scoring with a delightful chip for Madrid.

Comments
Topics mentioned in this article
Football Real Madrid Apoel Nicosia R Kaka
Get the latest updates on IPL 2021, check out the IPL 2021 Schedule and Indian Premier League Live Score . Like us on Facebook or follow us on Twitter for more sports updates. You can also download the NDTV Cricket app for Android or iOS.