Lionel Messi gave Barcelona an early lead which was cancelled out by Bayer Leverkusen's Javier Hernandez. The Spanish giants entered the UEFA Champions League last 16 for the 12th year after the draw 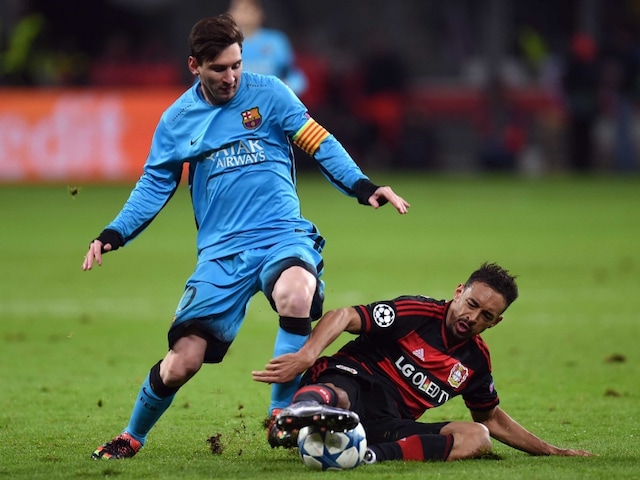 Bayer Leverkusen bowed out of the Champions League on Wednesday despite holding a weakened Barcelona side, led by goal-scorer Lionel Messi, to a 1-1 draw. (Barcelona Star Neymar Suffers Leg Injury Ahead of Crucial Tie)

The Argentinian superstar gave Barca the lead at the BayArena with a trademark early goal which was cancelled out by Javier Hernandez's 14th for Leverkusen in all competitions this season.

With Roma drawing 0-0 at home to BATE Borisov, Leverkusen had to beat Barcelona to progress but the Germans will instead find themselves in the Europa League come February.

"We had the chances, we just didn't use them."

The Spaniards went through to the knock-out stages, for the 12th year in succession, as Group E winners, ahead of Roma.

Cameroon teenager Wilfrid Kaptoum made his Champions League debut and midfielder Sergi Samper made only his third appearance at this level in an experimental side.

Brazil superstar Neymar injured his groin in training on Tuesday and Luis Suarez spent the game on the bench.

The team selection was understandable as Barcelona have a busy spell coming up with the Catalans playing a Club World Cup semi-final in Japan on December 17.

"I wanted to give the players who have played the most this season a rest and I saw some good signs against a team which really had to win," said Enrique.

"This game was a litmus test to see how we'd cope. A few of our young players did well in the Champions League arena.

"We'd like to have won, but Bayer gave their all and we didn't want to burden our players with qualification assured."

Leverkusen failed in their bid to beat the Spanish giants despite having 25 shots on goal compared to the Spaniards' six.

This was their seventh straight defeat to Barca, who took the lead when Rakitic's through ball caught the defence napping and gave Messi a one-on-one with Bernd Leno.

Barca's superstar calmly rounded the Leverkusen goalkeeper and slotted home with a trademark finish on 20 minutes.

Having been unlucky to lose 2-1 at the Camp Nou in September, Leverkusen did not panic at the BayArena and drew level when Hernandez claimed his 12th goal in Leverkusen's last 11 games.

Swiss winger Admir Mehmedi put in a low cross, which Hakan Calhanoglu left for the Mexican striker and Hernandez crashed his shot past Ter Stegen with his left foot on 24 minutes.

It was 1-1 at the break, but Calhanoglu missed a golden chance in the opening minutes of the second-half to put the hosts ahead.

Hernandez lobbed pass put him one-on-one with Ter Stegen, but Calhanoglu fired across the face of the Barca goal.

With an hour gone, Karim Bellarabi squandered a half-chance when he fired at Ter Stegen after getting in behind the defence.

With ten minutes left another deft through ball from Rakitic released Sergio Ramirez for a rare Barcelona attack, but the Spain Under-21 winger's cross was pounced on by Leno as it finished level.

Gary Neville endured the worst possible start to his managerial career as Valencia crashed out of the Champions League due to a 2-0 home defeat to the already eliminated Lyon on Wednesday.

Goals either side of half-time by Maxwel Cornet on his first Champions League start and Alexandre Lacazette handed the French side their first European win of the season.

Belgian champions Gent beat Zenit St Petersburg 2-1 to seal their place in the last 16 behind the Russians in Group H.

Comments
Topics mentioned in this article
Barcelona Bayer Leverkusen Lionel Messi Football
Get the latest Cricket news, check out the India cricket schedule, Cricket live score . Like us on Facebook or follow us on Twitter for more sports updates. You can also download the NDTV Cricket app for Android or iOS.