David Luiz put aside Brazil's World Cup debacle to help his new club - Paris St Germain - beat Napoli 2-1 in a friendly. His national captain Thiago Silva though trudged his way out early into the match. 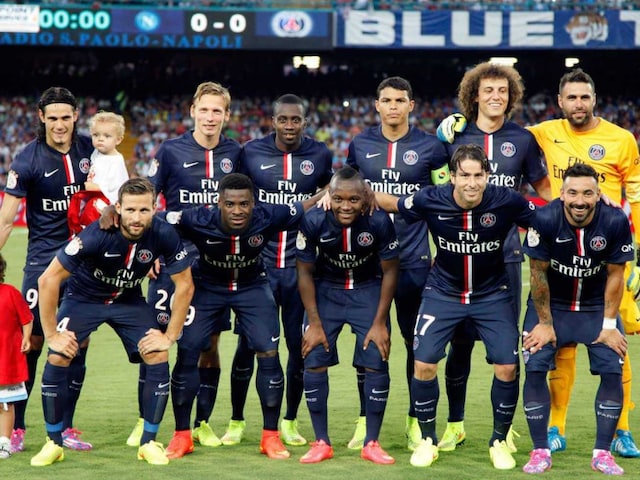 Paris Saint-Germain players pose before the start of their match against Napoli.© AFP
Naples:

Brazil centreback David Luiz began life with his new club French champions Paris Saint Germain with a 2-1 win in a friendly against Italian side Napoli on Monday in Naples.

The 27-year-old -- who cost the French side a reported 50million euros (£39.9m, $67.1m) when he signed from Chelsea in June -- fared better than his national and club captain Thiago Silva, who had to go off in the 13th minute and trudged to the dressingroom with his right thigh strapped with ice.

Both only returned to France last week after taking a holiday following the World Cup where Luiz wept openly following the 7-1 humiliation by eventual champions Germany in the semi-finals -- Luiz captained the side as Silva was injured -- and then lost to the Dutch in the third place match.

Two others who also only recently returned Argentinian Ezequiel Lavezzi and Uruguayan striker Edinson Cavani received different reactions from the home crowd for whom they were heroes until they left in 2012 and 2013 respectively.

Lavezzi -- who impressed at the World Cup and was arguably Argentina's most effective player till he went off at half-time of the 1-0 defeat to Germany in the final -- went off to a standing ovation but Cavani weas booed and jeered throughout.

Lavezzi's compatriot Gonzalo Higuain gave Rafael Benitez's side the lead six minutes into the second-half only for PSG's Swedish star Zlatan Ibrahimovic, who had come on at the beginning of the second-half, to level four minutes later.

Luiz went close to opening his account for PSG with a thunderous header from a corner in the 76th minute but it went over the bar.

Comments
Topics mentioned in this article
Paris SG Napoli David Luiz Thiago Silva Football
Get the latest Cricket news, check out the India cricket schedule, Cricket live score . Like us on Facebook or follow us on Twitter for more sports updates. You can also download the NDTV Cricket app for Android or iOS.