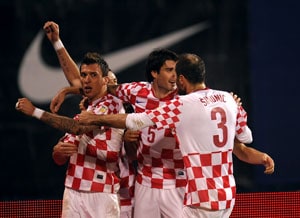 Ten-man Croatia secured a berth at their fourth World Cup finals next year with a 2-0 win in their play-off second leg tie against Iceland on Tuesday.

With last week's first leg goalless, Iceland arrived in Zagreb full of hope of becoming the smallest ever country to make it to a World Cup.

But those dreams were extinguished with goals from Mario Mandzukic in the 27th minute and Darijo Srna's 47th minute contribution.

Croatia made it hard for themselves when Mandzukic got sent off for a dangerous tackle not long after his goal.

However, in the second half it could have gone unnoticed on the pitch that they were a man down as they never stopped attacking.

"My respect to players who left their souls and hearts on the pitch, they all made me proud," Croatia coach Niko Kovac told state HRT television after the match.

"We had a vision and a goal. We insisted on that and we succeeded. We showed a modern football," the 42-year-old said.

The former Croatia captain made his bow as national team coach in Reykjavik on Friday, replacing Igor Stimac in the dugout in October.

Kovac, who took over a team in poor form and under pressure from the local media and public, added he also hoped to have "restored faith in Croatian football."

"We are thrilled to have qualified for the World Cup. We fully deserved it," midfielder Luka Modric said.

"When we show unity as we did today we can cope with the best world teams."

"We were convinced that we would be going to the World Cup. This was our worst qualifying match," he told reporters.

Tottenham Hotspur midfielder Gylfi Sigurdsson conceded: "Croatia were better, notably in the second match here in Zagreb. They deserved to go to Brazil."

Comments
Topics mentioned in this article
Gylfi Sigurdsson Mario Mandzukic Bayern Munchen Football
Get the latest updates on ICC T20 Worldcup 2022 and CWG 2022 check out the Schedule, Live Score and Medals Tally. Like us on Facebook or follow us on Twitter for more sports updates. You can also download the NDTV Cricket app for Android or iOS.