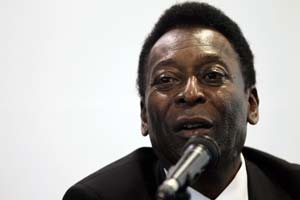 The 72-year-old wept as he spoke to reporters upon leaving the Albert Einstein Hospital in Sao Paulo in a wheelchair Thursday, reports Xinhua

"I never imagined that the Brazilians would be so concerned about me," Pele said. "I want to thank everybody who sent me messages of support."

Pele underwent the surgery last Saturday (Nov 10) after originally visiting his doctor for a routine medical check to renew his health insurance.

Dr Roberto Dantas Queiroz, who was responsible for the procedure, said the former Santos and New York Cosmos star would remain in a wheelchair during his initial recovery stage.

According to Queiroz, the joint's damage had largely been caused by years of wear and tear suffered during the Brazilian's playing career.

Pele featured in three World Cup-winning teams for Brazil and scored 1281 goals in a career spanning more than two decades.

Comments
Topics mentioned in this article
Football Brazil England Pele
Get the latest updates on IPL 2021, IPL Points Table , IPL Schedule 2021 , live score . Like us on Facebook or follow us on Twitter for more sports updates. You can also download the NDTV Cricket app for Android or iOS.