It was the fourth successive time Messi has won the Balon d'Or, something nobody has ever done. But aged just 25, there is still plenty of time for the Argentinean to add more to his trophy cabinet, reports Xinhua. 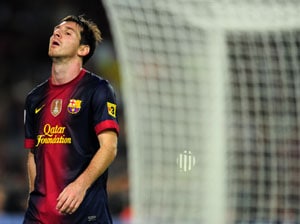 FC Barcelona striker Leo Messi said that he hoped to add further Balon d'Or trophies to the four he has won in the past four years.

Messi was given the award last Monday. This is an award given by France Football and FIFA to the best player in the world.

It was the fourth successive time Messi has won the Balon d'Or, something nobody has ever done. But aged just 25, there is still plenty of time for the Argentinean to add more to his trophy cabinet, reports Xinhua.

"I hope to win more but it is not an obsession, at least not at the moment," said Messi Friday in an interview with France Football.

"I want to enjoy the present and we will see what happens in a few months," added the striker, who scored a record 91 goals during 2012.

Messi admitted it was nice to win individual awards but insisted that in football it was not the most important thing.

Messi has one moment that he cherishes above all: his headed goal against Manchester United in the 2009 Champions League final.

"When I close my eyes, the first thing that comes to mind is the night we won in Rome, my headed goal and the collective joy at the final whistle. Everything else is good, the record and all that, that is what I dream about," said Messi, who added that his first Balon d'Or was the one he most cherished.

Finally Messi apologised for not having mentioned his teammates, Barca coach, Tito Vilanova or Cristiano Ronaldo, who was runner-up to Messi for the Balon d'Or in his acceptance speech.

"I am sorry about that. I didn't say all that I wanted to. I hadn't prepared any notes or a speech, but I didn't mean to forget anyone, but the same thing happens everytime, I get emotional and lose the thread," he said.

Comments
Topics mentioned in this article
Football FIFA Barcelona Republic of Ireland France Mexico Argentina South Africa Lionel Messi
Get the latest updates on ICC T20 Worldcup 2022 and CWG 2022 check out the Schedule, Live Score and Medals Tally. Like us on Facebook or follow us on Twitter for more sports updates. You can also download the NDTV Cricket app for Android or iOS.