Stephan Lichtsteiner Nets on Return as Juventus Draw at Gladbach

It was Stehan Lichtsteiner's first appearance since the 31-year-old wing-back had an operation to fix an irregular heartbeat after coming off during a match in September with breathing difficulties. 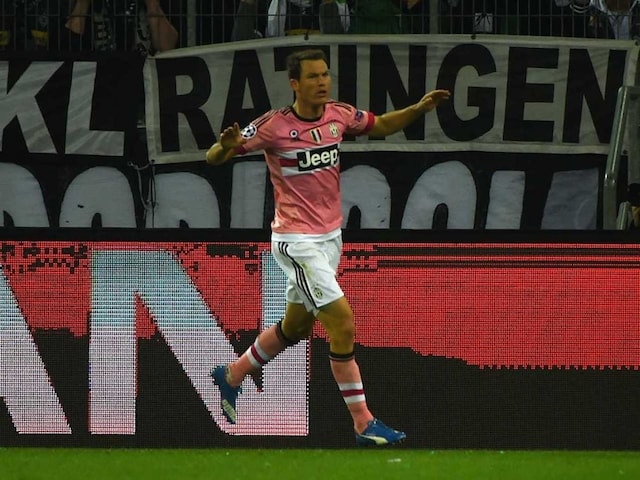 Ten-man Juventus took a step towards the Champions League knockout phase with a 1-1 draw at Borussia Moenchengladbach on Tuesday as Stephan Lichtsteiner scored on his return from heart surgery.(Madrid, City in Last 16)

The Swiss defender netted just before the half-time break to cancel out Fabian Johnson's 18th-minute opener for the hosts.(United End Goal Drought)

It was Lichtsteiner's first appearance since the 31-year-old wing-back had an operation to fix an irregular heartbeat after coming off during a match in September with breathing difficulties.

"For me it was important to resume playing quickly (after surgery]. I trained only twice with the team but the match was really important for us and I wanted to help the team," said Lichtsteiner.

"We wanted a victory, but considering that we conceded early and that we were reduced to 10 men early in the second half, we can be satisfied with the draw."

Juventus played the last 35 minutes with 10 men after their Brazilian midfielder Hernanes was sent off for a late tackle on Gladbach's Alvaro Dominguez, just as the visitors were starting to take control of the game.

Despite the point, Juventus remain unbeaten in Europe, but dropped to second in Group D with Manchester City going top by virtue of their 3-1 away win at Sevilla, in so doing qualifying for the last 16.

Gladbach remain bottom of the group with just two points from four games and need to beat Sevilla in their next home Champions League match later this month just to stay in contention to qualify for the Europa League knockout phase as third in the group.

"We're all very disappointed, we controlled the game and had the better chances," Gladbach's Guinea international Ibrahima Traore told Sky.

"Unfortunately all that was missing at the end was a goal."

After their teenage defensive midfielder Mahmoud Dahoud hit the crossbar with a curling long-range shot, the hosts took a deserved lead at Borussia Park.

Juve's Giorgio Chiellini failed to clear a low cross into the box, Brazilian striker Raffael collected the loose ball and played in US international Johnson, who slotted his shot past the Italian goalkeeper Gianluigi Buffon.

Having been named in the starting line-up, Lichtsteiner showed he is back to his best when Paul Pogba lifted a superb pass over the Gladbach defence and the Swiss smashed the ball past his national team-mate Yann Sommer on the volley on 44 minutes.

It was 1-1 at the break but the game's tempo changed when Dutch referee Bjorn Kuipers showed Hernanes a straight red card on 55 minutes, although replays showed both he and Dominguez went fully committed into a challenge for the loose ball.

However, the few clear chances Gladbach carved out were expertly saved by the impressive Buffon.

With time almost up, Juventus's veteran goalkeeper kept his side in the game when the 37-year-old palmed Thorgan Hazard's shot over the bar with a reflex save.

His record in Europe is now two draws and a defeat after his side earned a point in the away match in Turin a fortnight ago and lost at home to Manchester City.

Comments
Topics mentioned in this article
Stephan Lichtsteiner Juventus Football
Get the latest Cricket news, check out the India cricket schedule, Cricket live score . Like us on Facebook or follow us on Twitter for more sports updates. You can also download the NDTV Cricket app for Android or iOS.