Spain unbeaten after seeing off Lithuania

World and European champions Spain remained unbeaten atop Group I of Euro 2012 qualifying with a 3-1 victory over Lithuania here on Tuesday. 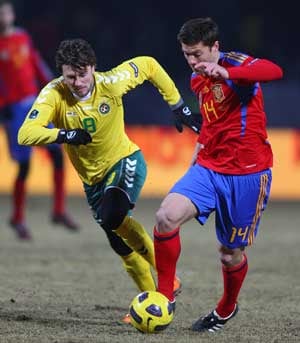 World and European champions Spain remained unbeaten atop Group I of Euro 2012 qualifying with a 3-1 victory over Lithuania here on Tuesday.

Goals from Xavi and Juan Manuel Mata sandwiched an own goal by Tadas Kijanskas to hand the Spaniards their fifth win from five games, although the hosts had briefly drawn level with a wonder strike by Marius Stankevicius.

"It was important to win today despite the lamentable state of the pitch," said Spain midfielder Xavi. "It's just sand, it's sad to see a pitch like that. You can't play football here.

"But we're happy. We have a foot and a half in the Euro," he told Telecinco. "They played on the counter-attack and we tried not to fall into their trap."

All the pre-game talk had been of the poor quality of the pitch, with Spain coach Vicente del Bosque even going as far as saying he would prefer his side not to play the match due to the woeful state of the playing surface.

But the two teams seemed unaffected on the pitch, with Spain opening the scoring in the 20th minute when Xavi's dipping shot took a wicked deflection off a defender to loop past goalkeeper Zydrunas Karcemarskas.

But Lithuania battled well against the winners of the 2010 World Cup in South Africa and hit back in the 57th minute through Stankevicius.

The Valencia defender capitalised on a poor clearance from the penalty area to drill a right-footed volley straight and hard past despairing Spain captain Iker Casillas in goal.

Xabi Alonso then saw his well-struck 65th-minute free-kick magnificently tipped over the bar by Karcemarskas.

Although Spain were not dominating midfield, a slip-up by the hosts saw Mata played in down the left.

The Valencia forward drove into the area and crossed perfectly into the path of Fernando Llorente.

But the Athletic Bilbao striker was beaten to it by the misjudged knee of fast-approaching defender Tadas Kijanskas, contact from which nudged the ball into the goal.

Spain wrapped up the result when a beautiful one-touch build-up saw David Silva play in Mata, the diminutive winger taking the ball on and beating Karcemarskas at the near post.

Comments
Topics mentioned in this article
Yoann Gourcuff Philippe Mexes Gianluigi Buffon Franck Ribery Football Spain
Get the latest updates on ICC T20 Worldcup 2022 and CWG 2022 check out the Schedule, Live Score and Medals Tally. Like us on Facebook or follow us on Twitter for more sports updates. You can also download the NDTV Cricket app for Android or iOS.