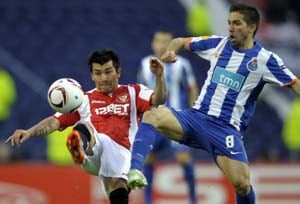 "Espanyol Barcelona, Villarreal, Zaragoza, Athletic Bilbao, Real Sociedad and Sevilla launched (on Wednesday) an action in the courts of Madrid to condemn the agreement passed by the general assembly of the LFP on February 11," the clubs said in a joint statement.

The LFP announced on February 11 its decision to strike on the weekend of April 2-3 to protest a long-standing rule that one first division match per weekend is broadcast for free on television.

Negotiations followed with political leaders to find a solution, but the LFP reiterated its decision late on Tuesday.

The decision means the Spanish league season could be extended to the weekend of June 11-12 instead of May 21-22.

The six clubs believe that the strike is "a disproportionate, untimely measure that is contrary to the interests of the clubs, the competition and the fans and is, in addition, contrary to the law."

A 1997 law allows one first division match per weekend to be broadcast for free on television, rather than on pay-per-view or cable.

According to the sports daily AS, Real Madrid and Barcelona, the country's top two clubs, receive 125 million euros per season, several times more than any others.

Comments
Topics mentioned in this article
Real Madrid Barcelona Football Spain Sevilla Espanyol
Get the latest updates on ICC T20 Worldcup 2022 and CWG 2022 check out the Schedule, Live Score and Medals Tally. Like us on Facebook or follow us on Twitter for more sports updates. You can also download the NDTV Cricket app for Android or iOS.