Fireworks, banners, plumes of smoke and crowds, delirious at the sight of a team bus, let alone a goal, the Seville derby is a fixture renowned for its intensity and cherished by its supporters. 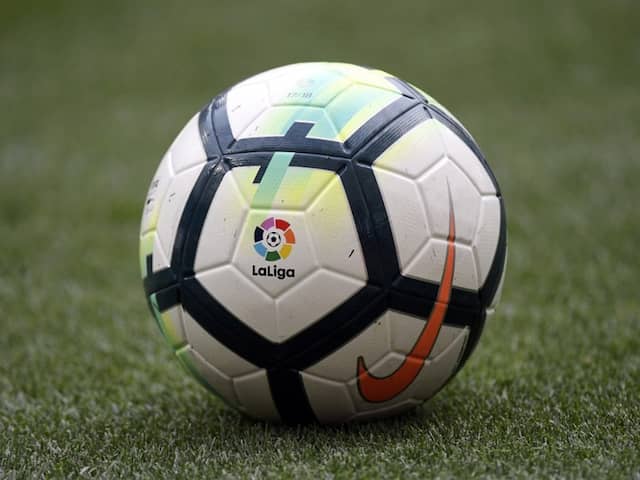 La Liga's hope is to pitch the restart as a celebration.© AFP

Sevilla vs Real Betis is the game in Spain most defined by its fans and on Thursday it will be a first glimpse of La Liga without them as the season resumes behind closed doors after three months away due to the coronavirus. Fireworks, banners, plumes of smoke and crowds, delirious at the sight of a team bus, let alone a goal, the Seville derby is a fixture renowned for its intensity and cherished by its supporters. There will be 110 games held in 39 days, with clubs playing every three days for five and a half weeks, but none for the rest of the season will be as much of a stark reminder of what is missing. "We can't wait to return to competing," said Sevilla coach Julen Lopetegui on Wednesday.

"In circumstances that three months ago were unimaginable but today it is the reality and we have to adapt.

"The derby is going to be played and we all know what it means. We have to respond."

At the Ramon Sanchez Pizjuan, where Sevilla had only lost two league games this season in front of their fans, the stands will be empty, except for officials and substitutes, who will be strecthed out across rows to maintain social distancing.

For those watching on television at home, the stands can be full, with virtual faces planted in place of vacant seats and fake crowd noise, taken from the computer game FIFA, ebbing and flowing according to the action.

La Liga's hope is to pitch the restart as a celebration.

"Volver es Ganar", has been the league's slogan, "To Return is to Win", and there is excitement around football's return, to go with the relief in recent weeks as the number of deaths and infections have fallen.

Spain has recorded more than 27,000 deaths overall and remains one of the worst-hit countries in the world by coronavirus.

But there were 48 new infections on Monday, the lowest since lockdown was declared by the government and down from as many as 10,000 towards the end of March.

Sport resuming adds to the sense that the crisis is now under control but the differences in Seville could also be a sobering demonstration of Spain's "new normal".

All players will arrive wearing masks and gloves and have their temperatures checked before entering the stadium.

In total, only around 270 people will be allowed inside while outside, 600 police and security personnel will remain in operation until hours after the final whistle.

Their remit will be to ensure fans do not gather together in large groups, fill up small areas or congregate on the same streets.

A perimeter fence will be in place to keep them at a distance from the stadium.

"It is very important that they pay attention to what is asked of them," said Betis coach Rubi. "It will be the only time in their life that this will happen. They have to live it 100 per cent but while respecting the rules."

The football will be the same, albeit with five substitutes allowed instead of three and two drinks breaks permitted to take into account the possibility of extreme heat this summer.

Sevilla cannot afford a slow restart either given they sit at the front of a tight queue of clubs aiming to overtake them and finish in the top four.

One point behind are both Real Sociedad and Getafe. Atletico Madrid are two points back in sixth.

Betis have not entirely given up on European qualification themselves although it will take a formidable run to close a nine-point gap on seventh-placed Valencia, who host Levante on Friday.

"We are not going to make any excuses about the unusual circumstances, the lack of fans or the small amount that we have trained," said Rubi. "This is the situation. We have to face it."