Nicolo Barella curled in the opener from a distance with Achraf Hakimi setting up Ivan Perisic for the second to give Inter Milan a first league win in Florence in seven years. 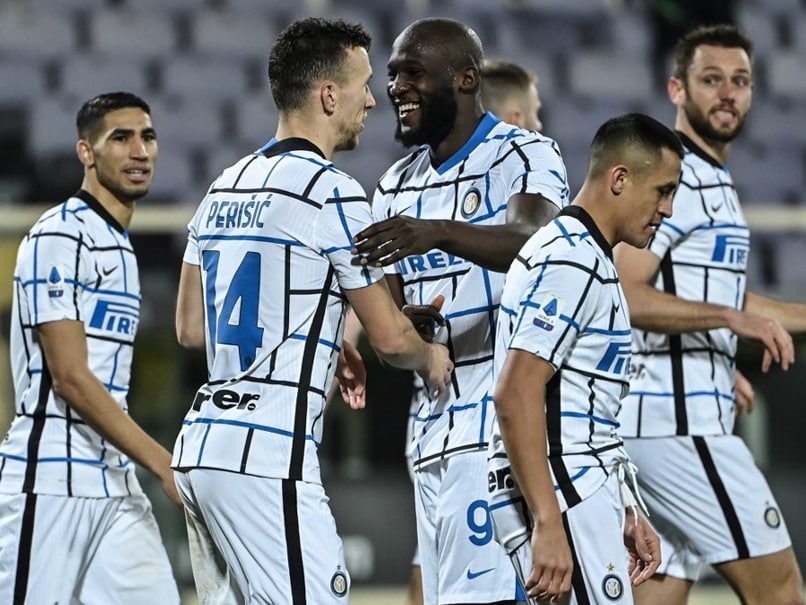 Inter Milan moved top of Serie A on Friday with a 2-0 win at Fiorentina.© AFP

Nicolo Barella and Ivan Perisic scored in either half as Inter Milan moved top of Serie A on Friday with a 2-0 win at Fiorentina. Antonio Conte's side pulled one point clear of AC Milan to keep the pressure on their city rivals who host lowly Crotone on Sunday. Inter bounced back after their midweek Italian Cup semi-final, first leg defeat to Juventus in the San Siro. Italy midfielder Barella curled in the opener from a distance after half an hour with Achraf Hakimi setting up Perisic for the second seven minutes after the break to give Inter a first league win in Florence in seven years.

Conte sat out a touchline ban but Inter controlled the game against 12th-placed Fiorentina who were without injured French midfielder Franck Ribery.

"We're not thinking about putting pressure on anyone, just our own journey," said Conte's assistant Cristian Stellini.

"It wasn't easy after playing three days ago but we're satisfied, we created a lot of scoring chances and our forwards worked well together."

Fiorentina could thank goalkeeper Bartlomiej Dragowski for key saves, denying Barella early, with the Polish international also keeping out Hakimi, Perisic and Lautaro Martinez in the second half.

At the other end of the pitch Samir Handanovic saved from Giacomo Bonaventura and Cristiano Biraghi before the break.

"We could have closed it down earlier but these are three important points, we're there in first place and that's what matters," said Perisic.

"Now we'll go to Turin to win," added the 32-year-old of next week's Italian Cup semi-final, second-leg game against Juventus.

"We have to play every match as if it were the last, we have no room for error."

Inter play Lazio next weekend before a derby clash with Milan on February 21.

Just behind fifth-placed Napoli play Genoa with Lazio looking to push their winning streak to six matches against a Cagliari side without a league win in 13 attempts.

Ivan Perisic Football
Get the latest updates on ICC Women's Cricket World Cup 2022 and IPL 2022, check out the Schedule , Live Score and IPL Points Table. Like us on Facebook or follow us on Twitter for more sports updates. You can also download the NDTV Cricket app for Android or iOS.