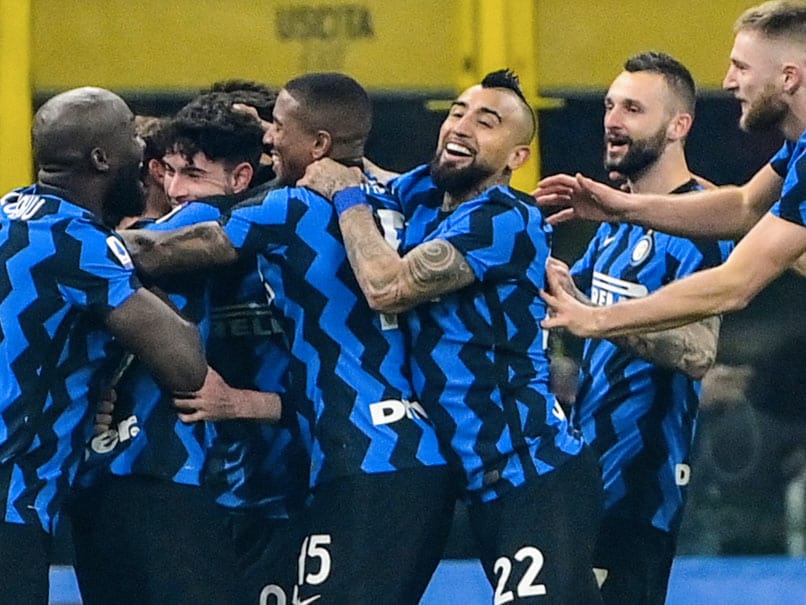 Inter Milan shocked champions Juventus 2-0 to move level on points with Serie A leaders AC Milan on Sunday, boosting their hopes of a first league title since 2010. Arturo Vidal got his head to a Nicolo Barella cross in the 12th minute for his first league goal for Inter Milan against his former club. Barella added the second seven minutes after the break as Inter claimed a first victory over Juventus since September 2016, ending a series of seven matches without a win. "It was a bad defeat, we didn't expect it, we couldn't have put in a worse performance than this," said Juventus coach Andrea Pirlo after his second league defeat this season.

"Our attitude was wrong, right from the start.

"We were too passive, fearful, we only thought about the defensive phase."

Inter are equal on 40 points with local rivals Milan, who travel to Cagliari on Monday, with Juventus seven points behind the top two in fifth.

"To win against a team like Juve you have to touch perfection," said Inter coach Antonio Conte after his first win in four meetings against the club he led to the first three of their current run of nine consecutive league titles.

"I'm happy for the lads because these are games that give you self-esteem and make you understand that we're on the right path.

"I've seen a credible Inter, and it is the greatest satisfaction after a year and a half of work".

Cristiano Ronaldo looked to have broken through for the away side after 11 minutes but Federico Chiesa was ruled offside in the build up.

And Chilean Vidal made no mistake for last season's Serie A runners-up two minutes later off Barella's perfect cross.

"We've shown that we're up to fighting for the Scudetto," warned Vidal, who won four league titles in as many years with Juventus.

Romelu Lukaku then forced a save from Juventus goalkeeper Wojciech Szczesny on 24 minutes, with Lautaro Martinez spurning the chance to score on the rebound.

Omnipresent midfielder Barella created another chance for Lukaku which Szczesny cleared, and the Polish keeper also denied Barella before punching the ball off Lukaku's head at full stretch.

A superb Alessandro Bastoni through ball to Barella paid off in the 52nd minute, with the pacy Italy midfielder shaking off Gianluca Frabotta and Giorgio Chiellini to blast home the second.

Pirlo made a triple change just before the hour with Weston McKennie, Federico Bernardeschi and Dejan Kulusevski coming off the bench.

But Inter 'keeper Samir Handanovic was rarely threatened, clearing a McKennie header on 61 minutes, and a Chiesa effort three minutes from time.

"It's a slip-up, but our ambition remains the same, there is still a long way to go," warned Pirlo, whose side next meet Napoli in Wednesday's Italian SuperCup.

In Naples, Lorenzo Insigne scored twice and set up another as Napoli thumped Fiorentina 6-0 to move third ahead of Roma who lost 3-0 to local rivals Lazio on Friday.

Insigne got the first goal in the fifth minute at the Diego Armando Maradona Stadium as Gennaro Gattuso's side went four goals up in the first half.

Napoli were awarded a penalty after Gaetano Castrovilli fouled Tiemoue Bakayoko. Insigne converted from the spot for his ninth goal this season.

Substitute Matteo Politano completed the rout with a minute to go.

"It looked easy but it wasn't," said Gattuso as Napoli moved level on points with Roma.

Atalanta missed the chance to move third, dropping points before next week's trip to AC Milan with a goalless draw against lowly Genoa.

Gian Piero Gasperini's side had won their first three matches of the year with a total of 12 goals scored.

Hans Hateboer rattled the post for Atalanta after 65 minutes in the best chance for the hosts who are sixth, eight points behind Milan. Genoa are 16th position, two points above the relegation zone.