Serie A: Romelu Lukaku and Lautaro Martinez each bagged a brace in a seven-goal thriller to keep Inter Milan second, a point behind Juventus. 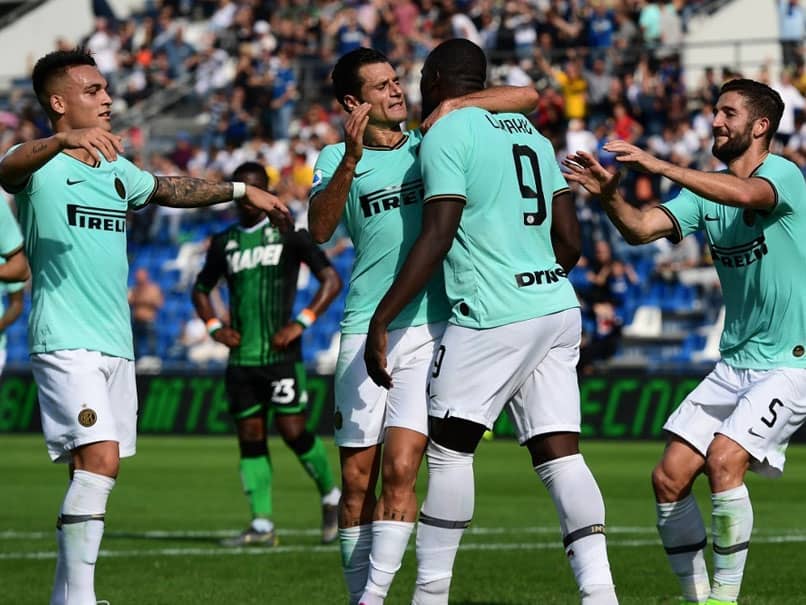 Inter Milan survived a late Sassuolo scare and a bizarre intervention by a parachutist to win 4-3 and keep in touch with leaders Juventus in Serie A on Sunday as Stefano Pioli's first game in charge of AC Milan ended in a 2-2 draw against lowly Lecce. Romelu Lukaku and Lautaro Martinez each bagged a brace in a seven-goal thriller to keep Antonio Conte's side second, a point behind Juventus who beat Bologna 2-1 on Saturday. Inter Milan had led 4-1 with 20 minutes to go after Martinez had opened the scoring after two minutes in Sassuolo, adding a second from the penalty spot after 71 minutes.

Belgian forward Lukaku found the net after 38 minutes and converted a penalty just before the break despite a parachutist inexplicably landing on the pitch just as he was about to kick the ball.

The man was quickly led off by security agents as players and fans looked on bewildered. Then the former Manchester United striker slotted in to give Inter a 3-1 lead.

With the game under control Conte brought on winger Matteo Politano and midfielder Valentino Lazaro for their first appearances this season.

Then Filip Djuricic (74) and Jeremie Boga (81) hit back for the hosts, who are struggling in 17th position, to add to Domenic Berardi's first-half goal.

Inter held on for a win after consecutive defeats against Barcelona in the Champions League and Juventus in Serie A.

"Once it goes to 3-1 and 4-1, it should be over," said Lukaku who has now scored five Serie A goals in eight games.

"In the first half, we did everything well. However, we should have scored in the first 15 minutes after the restart to really kill off the match.

"The positive we take is that we got the three points, but we need to defend better than that.

"It was very important to get this win."

Babacar cancelled out Turkish winger Hakan Calhanoglu's first-half goal, when the Senegalese forward missed a penalty but turned in the rebound after an hour in the San Siro.

Krzysztof Piatek came off the bench and scored with nine minutes to go after a Calhanoglu pull back, but Calderoni rifled in the equaliser in stoppage time.

"Tonight I suffered because of my exes," said Pioli.

"I had hoped for a gift this evening for my birthday, but I saw some good things, the team deserved a win, but it was our own fault we didn't," added the former Fiorentina coach, who turned 54 on Sunday.

Milan are in 12th with ten points from eight games. Lecce are one point above the relegation zone.

Claudio Ranieri's first game in charge of basement club Sampdoria also ended in a goalless draw in Genoa against his former club Roma on his 68th birthday.

The visitors lost Bryan Cristante and Nikola Kalinic to injury early, with coach Paulo Fonseca sitting out a touchline ban.

Edin Dzeko came on for Kalinic with his face protected by a mask after breaking a cheekbone two weeks ago.

The Romans played the final five minutes a man down after Justin Kluivert was sent off for a second yellow card.

The match was also overshadowed by monkey chants directed at Sampdoria midfielder Ronaldo Vieira for which the Roman club apologised and vowed to identify and ban those involved.

The Guinea Bissau-born, English footballer later wrote on Instagram: "Football has a responsibility to punish and educate the idiots in the stadium today."

Roma fall to sixth in the table behind Cagliari who beat SPAL 2-0 as Sampdoria stay bottom but take their first point in four games.

Ranieri said he had made progress.

"I'm satisfied especially after only a week training together and against a very good Roma," said the former Leicester City coach.

"Now let me have time to get to know the players and then we will try to find solutions to score."

Parma move up to eighth after substitute Andreas Cornelius scored a hat-trick in a 5-1 hammering of lowly Genoa as Stefano Okaka's header was enough to get struggling Udinese past Torino slipped to 10th.