Real Madrid defeated Napoli 6-2 on aggregate to enter the quarterfinals of the Champions League. 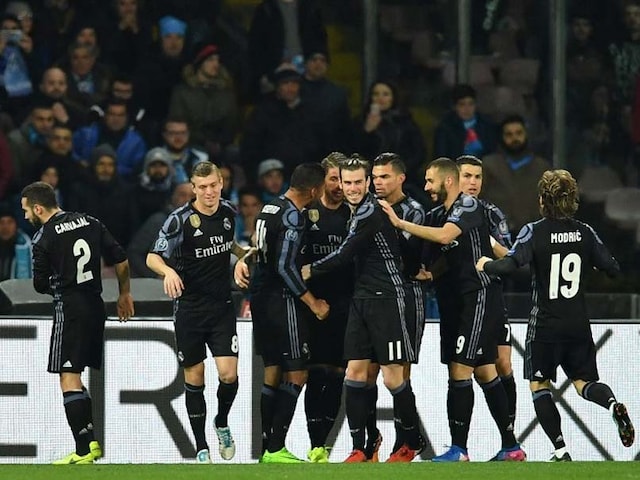 Real Madrid earned a 3-1 victory on Napoli in the Champions League on Tuesday.© AFP

Real Madrid came out with a clinical performance to defeat Napoli 3-1, and on aggregate 6-2, to enter the Champions League quarterfinals at the Stadio San Paolo in Naples on Tuesday. Captain Sergio Ramos and Alvaro Morata struck one apiece as 11-time winners Real Madrid secured a seventh successive Champions League quarter-final berth. "We're happy to have won," said Real coach Zinedine Zidane. "We suffered a lot in the opening half when they had us under a lot of pressure. But after a good talk about what we had to do in the second half, we were much better."

Real, who took a commanding 3-1 first leg lead at the Santiago Bernabeu last month, looked to be facing a tough night in Naples after Dries Mertens finished off a great attacking move to give the hosts a 24th minute lead.

But Napoli coach Maurizio Sarri had warned of the threat from the "world's richest club, with the best players" a day earlier.

And Zidane's 'Galacticos' emerged from the half-time interval in far more clinical fashion.

Ramos rose to head Real level six minutes after the restart and a second header which deflected off Mertens at Pepe Reina's near post gave the Spaniards a 2-1 lead by the 57th minute.

Napoli saw late claims for a penalty waved away when Mertens tumbled in the box and suffered more woe in the first minute of added-on time when ex-Juventus striker Alvaro Morata came off the bench to hit their third for a 6-2 aggregate score.

"The second goal took away practically any chance we had of trying to qualify, we probably need a little bit more aggression at the corner to try and put him off," said Sarri.

"It leaves us with a bitter taste because for the opening 55 minutes we were far superior.

"But that's mostly because our fans had so much expectations on us. We're sorry for our public, because we feel they deserved a lot more.

"But this (Real) is a team with great talent that, physically, were superior to us."

Napoli required nothing short of a miracle if they were to reach the last eight for the first time -- although a bright opening reflected a growing belief in the football-mad southern city the Azzurri could cause an upset.

Carvajal: "At the break Zidane told us what we needed to change and to go up a gear - and that's exactly what we did" #UCL pic.twitter.com/Up3d2wipLv

Maurizio Sarri's men had 11 shots in the opening period, the most Real had seen in a Champions League game since facing 15 against Juventus in 2013.

But neither Mertens, Lorenzo Insigne or Hamsik got shots past Reina in a busy opening period that had most of the 56,695 crowd in full voice.

On Real's first real foray, Luka Modric outmanoeuvred Kalidou Koulibaly to deliver a back-post cross that Reina collected after a mix-up between Ronaldo and Karim Benzema.

Gareth Bale then escaped down the right to deliver a cross that Kroos, from the edge of the area, volleyed straight at Reina.

But Real were left ball-watching on 24 minutes after a slick passing move between Hamsik and Mertens that saw the Belgian run in to beat Keylor Navas at his bottom left corner.

The San Paolo erupted, but relief reigned moments later when Ronaldo rounded Reina to see his low drive come off the base of the post.

Napoli could have had a second but Hamsik fired high and wide before seeing a shot from the right byeline blocked by Navas.

When Hamsik gave away possession minutes after the restart, Kroos's dangerous cross to the back post was cleared by the head of Mertens.

The danger of Hamsik's error became apparent when Ramos rose to meet Kroos's corner to stretch the back of the Napoli net.

Sarri added on Ramos: "He's world class at dead ball situations. He scores seven or eight goals a year like that."

Zidane "I didn't think we were in danger of going out. Over 2 games we scored 6 goals. We suffered at times but you always do." #UCL pic.twitter.com/TbBLW8L9Uu

After Allan was cautioned for a challenge on Casemiro, the Brazilian was replaced by Marko Rog.

But Napoli's dream died a minute later. Kroos delivered again from the corner flag and Ramos's glancing header at the near post came off Mertens to leave Reina rooted to the spot.

Napoli hit back, Rog setting up Hamsik for a cross that Navas got down low to smother.

But as Napoli tired in the closing minutes, Morata ran in to meet the rebound after Reina spilled a Ronaldo strike.

Comments
Topics mentioned in this article
Real Madrid Napoli Football
Get the latest Cricket news, check out the India cricket schedule, Cricket live score . Like us on Facebook or follow us on Twitter for more sports updates. You can also download the NDTV Cricket app for Android or iOS.