Sepp Blatter warns players not to run away from racism

Blatter is adamant the game should always go on whatever the provocation, but he does admit that greater sanctions need to be placed on guilty parties if football is to effectively combat racism. 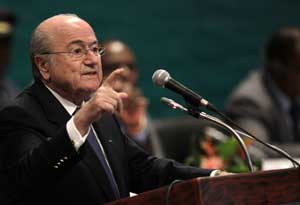 FIFA president Sepp Blatter has warned players that running away from racism is not the right way to deal with the issue.

AC Milan midfielder Kevin-Prince Boateng and his team-mates walked off the field after he was subjected to abuse during a recent friendly match with Pro Patria.

Many players including Manchester United defender Rio Ferdinand and former Arsenal star Patrick Vieira praised Boateng for standing up to the racists, but Blatter responded to the incident by insisting players should not leave the pitch.

Blatter is adamant the game should always go on whatever the provocation, but he does admit that greater sanctions need to be placed on guilty parties if football is to effectively combat racism.

"I think we can never do enough to eradicate all the racism in football," Blatter told Sky Sports News.

"We have already tried and you have given, in Great Britain, the best example of how to eradicate violence in football with the modern stadia, with the controls and education that this is the one thing."

In a bid to give more bite to their anti-racism stance, FIFA last week ordered the Bulgarian and Hungarian football associations to play a game behind closed doors in response to racism incidents involving their fans.

But Blatter believes a punishment of point deductions could prove to be even more effective.

"Already to have a match played without spectators is a warning, it's a warning for all the spectators but the situation is now as such, you remember the Boateng problem, running away.

"I made a comment on that and I still have the same feeling, it was good what he has done in order to give this impact by saying 'listen, look at what has happened' but it can't be the solution.

"It can't be the solution because you can never solve any problem in your life, being in private life, in economic life, wherever, by running away.

Blatter was also quizzed about the failures of England's national team, who are currently attempting to qualify for the 2014 World Cup in Brazil after a lacklustre performance at Euro 2012.

Blatter offered some advice to the English Football Association, saying he felt too many overseas players were harming the national team's chances.

"You have too many foreigners and not English players, so your national team is not yet, I have to say, is not yet at the level of some national teams," he said.

"If you look to Spain, Italy and Germany you realise that 80 percent or even more of the players of the national team, they play in their own league, and so it is an influence of how many good players you have in your own league for the national team."

Comments
Topics mentioned in this article
Football FIFA Sepp Blatter AC Milan Manchester United Mexico South Africa Republic of Ireland France Kevin-Prince Boateng
Get the latest Cricket news, check out the India cricket schedule, Cricket live score . Like us on Facebook or follow us on Twitter for more sports updates. You can also download the NDTV Cricket app for Android or iOS.