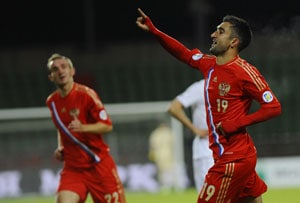 Russia moved closer to a berth in the 2014 World Cup with a confident 4-0 win over hosts Luxembourg in their European qualifying Group F here on Friday.

Second-placed Portugal, who are currently four points behind, take on Israel later on Friday.

"We played speedy football showing a great desire to win. I believe the spectators enjoyed the game.

"We clinched the win thanks to our rapid play. We kept the hosts under constant pressure giving them no chance to play their style of football. I'm pleased both with the result and my team's performance."

Russia continued testing the hosts defence and in the 39th minute Faizulin made it 2-0 firing under the crossbar from seven metres on Roman Shirokov's pass from the edge of the box.

Glushakov netted Russia's third in first-half injury time sending the ball into the net under Luxembourg 'keeper Jonathan Joubert from close range after the hosts mix-up in defence.

After the interval Russia kept up the pressure and comfortably held onto their advantage.

Kerzhakov rounded off the scoring with 17 minutes to go sending the ball home from close range also on Kombarov's precise cross from the left.

In their last group match on Tuesday Russia will face hosts Azerbaijan at Baku.

Comments
Topics mentioned in this article
Alexander Samedov Football
Get the latest Cricket news, check out the India cricket schedule, Cricket live score . Like us on Facebook or follow us on Twitter for more sports updates. You can also download the NDTV Cricket app for Android or iOS.