Daniel Sturridge went into the 2014 World Cup in Brazil as Roy Hodgson's first-choice striker, but missed the entirety of England's successful Euro 2016 qualifying campaign due to a succession of injuries. 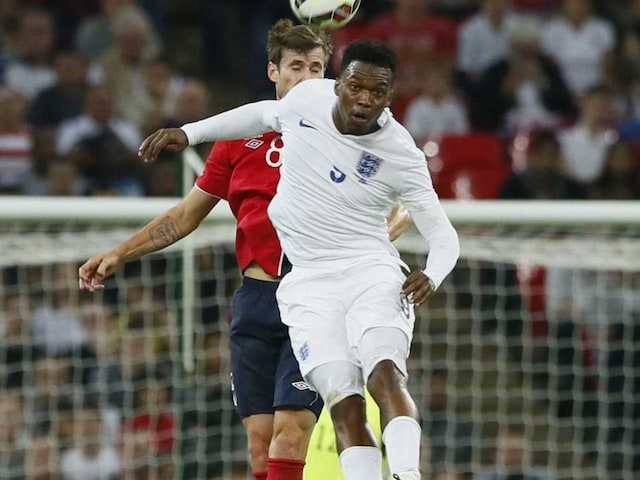 Daniel Sturridge will make his first England start for 18 months against the Netherlands.© AP

England manager Roy Hodgson has challenged Liverpool striker Daniel Sturridge to use Tuesday's friendly against the Netherlands at Wembley as an opportunity to stake a claim to a starting berth. (Rooney Faces Battle to Regain England Place After Berlin Win)

Sturridge, 26, went into the 2014 World Cup in Brazil as Hodgson's first-choice number nine, but missed the entirety of England's successful Euro 2016 qualifying campaign due to a succession of injuries. (England Make Stunning Comeback to Beat Germany in Friendly)

In the meantime he has seen Danny Welbeck, Harry Kane and Jamie Vardy steal past him in the striking hierarchy and Hodgson warned Sturridge that he will not get his place back without proving himself anew.

"Things have changed enormously in terms of our squad and how we're going to play since the World Cup," Hodgson told reporters on Monday.

"There's no carryover. What he's doing for Liverpool, for us in training and with us (in matches), that's what counts."

He added: "It's been a lot more frustrating for him than for me. But in the seven or eight days we've been together now, he doesn't carry any frustration with him. He's back to the player he was."

England approach the game on a high after Saturday's thrilling 3-2 friendly win over world champions Germany in Berlin, where goals from Kane, Vardy and Eric Dier saw Hodgson's men come from 2-0 down to prevail.

But while the ebullience of his youthful team's display could not be denied, Hodgson was wary about describing them as potential European champions.

"They haven't done it yet in a tournament," he said.

"We still don't really know how this young group would perform in tournament conditions against much more experienced teams like Germany, who are used to reaching finals, and France as the home nation.

Hodgson has confirmed that Sturridge will make his first England start for 18 months against the Netherlands, who did not qualify for Euro 2016.

Southampton's Fraser Forster will take over in goal from Jack Butland, who fractured his ankle against Germany, with Liverpool midfielder James Milner deputising as captain in the absence through injury of Wayne Rooney.

The match will feature a minute of applause for Johan Cruyff in the 14th minute -- a nod to his iconic shirt number -- with an image of the late Dutch great to be displayed on Wembley's big screens, but play will not stop as it did during Holland's 3-2 loss to France last Friday.

The original Wembley held special meaning for Cruyff, for it was there that he won the first of his three European Cups with Ajax as a player in 1971 and led Barcelona to their first European crown as manager in 1992.

Holland won 3-2 in their last game at Wembley in February 2012, courtesy of an Arjen Robben brace, and prevailed by the same scoreline against Wales on their most recent visit to Britain in November.

Comments
Topics mentioned in this article
England Netherlands Daniel Sturridge Jamie Vardy Harry Kane Football
Get the latest Cricket news, check out the India cricket schedule, Cricket live score . Like us on Facebook or follow us on Twitter for more sports updates. You can also download the NDTV Cricket app for Android or iOS.