Ronaldinho apparently was set to secure his place after playing well recently and receiving widespread praise from fans, local media and Scolari himself. 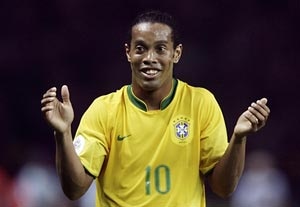 Ronaldinho and Kaka have been left out of Brazil's team for the Confederations Cup in June.

Scolari had said he would likely choose between Ronaldinho and Kaka for the Confederations Cup, and Ronaldinho apparently was set to secure his place after playing well recently and receiving widespread praise from fans, local media and Scolari himself. And while Kaka was struggling to get a chance to play with Real Madrid, Ronaldinho was making the most of his matches with Atletico Mineiro in Brazil.

Ronaldinho had a remarkable performance in a high profile Copa Libertadores match last week, helping his team rout Sao Paulo 4-1 and advance to the quarterfinals.

Ronaldinho was a starter in Scolari's team that won the 2002 World Cup in South Korea and Japan.

Brazil will play only two matches before the Confederations Cup, against England on June 2 at the new Maracana and against France in the southern city of Porto Alegre on June 9.

The national team is coming off a disappointing 2-2 draw with Chile at Mineirao Stadium last month, when Ronaldinho and the rest of the team left the pitch under loud boos by nearly 50,000 home fans.

Scolari has called up 44 players for five matches since retaking Brazil's reins in December. He had a difficult start, losing to England 2-1, drawing Italy 2-2 and Russia 1-1 before beating Bolivia 4-0 for his first win.

Comments
Topics mentioned in this article
Football Brazil Uruguay
Get the latest updates on ICC T20 Worldcup 2022 and CWG 2022 check out the Schedule, Live Score and Medals Tally. Like us on Facebook or follow us on Twitter for more sports updates. You can also download the NDTV Cricket app for Android or iOS.