He may have been roundly jeered by the home fans, but Franck Ribery's second-half cameo in France's 0-0 draw with Croatia has given coach Laurent Blanc plenty to think about. 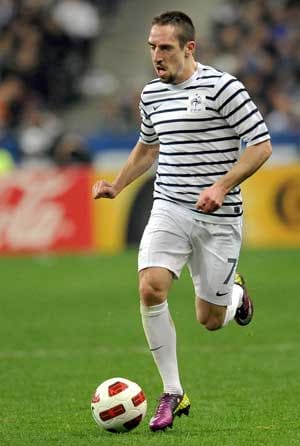 He may have been roundly jeered by the home fans, but Franck Ribery's second-half cameo in France's 0-0 draw with Croatia has given coach Laurent Blanc plenty to think about.

Boos and whistles rained down from the Stade de France stands as the Bayern Munich winger entered the fray in the 59th minute as a replacement for Florent Malouda on France's left flank.

Ribery has been widely cast as one of the ringleaders of France's training ground strike at last year's World Cup in South Africa and Tuesday's game marked his first appearance in a France shirt on home soil since then.

His first touches were booed with the same vigour as his initial entrance, but gradually the fans appeared to realise that he had brought a zest to the French attack that had hitherto been lacking.

Ribery's willingness to run at the visiting defenders sowed apprehension in the Croatian defence and freed up space for his attacking colleagues.

Samir Nasri and Karim Benzema both profited from Ribery's ability to suck defenders towards him and it was he who created an 84th-minute chance for fellow substitute Loic Remy that should have seen the deadlock broken.

"It was a strange match," said Ribery, who now has 50 international caps."

"There were some whistles but it's normal. After that the fans reacted well and that gave me confidence in myself."

"I wasn't really tense, I just wanted to show that I was happy to be there."

Ribery has never hidden the fact that he prefers to play on the left and his showing against Croatia followed on from a bright 20-minute spell in Friday's 2-0 defeat of Luxembourg after he had switched flanks from the right.

Adding weight to calls for Ribery to be handed a starting berth on the left-hand side of the French attack is the wretched current form of Malouda.

The Chelsea man looks a shadow of the player who started the current Premier League season in thrilling form and his performance against Croatia earned him a dismal rating of 3/10 from French sport daily L'Equipe.

"What is happening to Florent Malouda?" asked Wednesday's edition of the paper.

"How can you explain this chronic incapacity to make even the slightest difference for France, where he is racking up performances that are jaded or, as last night (Tuesday), completely insufficient?"

While Malouda flounders, Ribery appears to have rediscovered the form that once made him one of the most devastating attacking midfielders in Europe.

Having missed two months of the season with an ankle injury, his recent performances suggest he has finally moved on from a nightmare 2010, in which he was plagued by injuries and implicated in a child prostitution scandal.

He was superb in Bayern's 6-0 demolition of Hamburg on March 12, scoring one and creating two, while his last league appearance saw him crash home a long-range 88th-minute winner in a 2-1 win at Freiburg.

With Roma's Jeremy Menez and the Marseille pair of Remy and Mathieu Valbuena battling it out for a place on France's right flank, Ribery seems to have set his sights on a straight duel with Malouda for the left-wing position.

France are now out of action until a Euro 2012 qualifier in Belarus on June 3, by which time Ribery will hope to have done enough to prove that the left flank belongs to him.

Comments
Topics mentioned in this article
Football Bayern Munchen France Lionel Messi Xavi Jaume Franck Ribery Patrice Evra Arjen Robben
Get the latest updates on ICC T20 Worldcup 2022 and CWG 2022 check out the Schedule, Live Score and Medals Tally. Like us on Facebook or follow us on Twitter for more sports updates. You can also download the NDTV Cricket app for Android or iOS.