Real Madrid beat Zaragoza 4-0 but remain eight points behind record breaking Barcelona who earlier won 3-1 against Celta Vigo to go three points ahead of the pack. 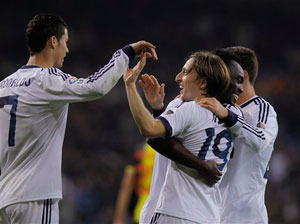 Real Madrid beat Zaragoza 4-0 but remain eight points behind record breaking Barcelona who earlier won 3-1 against Celta Vigo to go three points ahead of the pack.

Gonzalo Higuain and Angel Maria struck in a two minute blitz midway through the first half yesterday while Michael Essien and Luka Modric added another two late on but despite their recent good form it will be difficult to claw back the Catalan side, who have made their best start to a season.

Barcelona now have nine wins and a draw which beats their previous record by Louis van Gaal's 1997-98 side.

Madrid's defensive problems eased with the return of Alvaro Arbeloa who came in on the left of defence with Marcelo and Fabio Coentrao both still injured. It freed up Michael Essien to move back into midfield where Madrid were without Xabi Alonso and Sami Khedira, suspended and injured respectively.

Zaragoza arrived at the Bernabeu with confidence restored after back-to-back wins and they made it difficult for Madrid with their organisation. Madrid got their opening breakthrough out of the blue from a corner.

Raul Albiol leapt to power a header which Roberto got down well to save but Higuain smashed in the rebound.

Zaragoza fell further behind as Di Maria had an effort from a tight angle saved by the keeper but he then cracked in the rebound.

The visitors came out for the second half with more attacking intent, though they were mainly reduced to shots from distance and came closest to scoring with a drive by Jose Mari from 25 yards which crashed against the crossbar but Ronaldo also hit the woodwork for Madrid with a late freekick.

Essien and Modric added gloss to the result with goals in the 88th and 91st minutes. But Real coach Jose Mourinho had praise for his rivals.

"There were moments when I applauded Zaragoza. We were not solid, at the back yes but not going forward," said Mourinho.

"We wasted a lot of chances in attack and I think 3-1 would have been a fairer result."

Earlier, Adriano Correia put Barca ahead against Celta after 21 minutes and while Mario Bermejo momentarily brought the visitors level minutes later, David Villa quickly restored the lead while Jordi Alba secured the win in the second half.

"What is important are the points not the record. To have 28 from a possible 30 points is not easy and shows the desire of the players. In every game we have kept going until the end," said Barca coach Tito Vilanova.

Ahead of the game Lionel Messi showed off his Golden Boot trophy which he was presented this week after scoring 73 goals last season, while he was also the focus following the birth of his first child Thiago on Friday.

Barca were still without Gerard Pique and Carles Puyol at centre half and this time Sergio Busquets was chosen to play alongside Javier Mascherano.

Adriano Correia, joining the attack, put Barca ahead. Pedro Rodriguez got in front of full-back Roberto Iago on the right and crossed for the Brazilian to knock the ball home from close range. The celebrations had barely finished though before Celta were level.

An Alex Lopez pass split the Barca defence and Bermejo fired past Valdes on the rebound.

Barca restored their advantage with a delightful move as Villa back-heeled the ball to Iniesta, who got to the deadball line and pulled it back for Villa to score.

Right after the restart Aspas had a shot which went inches wide from a tight angle but Alba increased Barca's lead after 60 minutes. Villa flicked on an Iniesta pass to the full-back who did well to round the keeper and finish but replays showed he was clearly off-side.

Comments
Topics mentioned in this article
Football Barcelona Real Madrid
Get the latest updates on IPL 2021, IPL Points Table , IPL Schedule 2021 , live score . Like us on Facebook or follow us on Twitter for more sports updates. You can also download the NDTV Cricket app for Android or iOS.