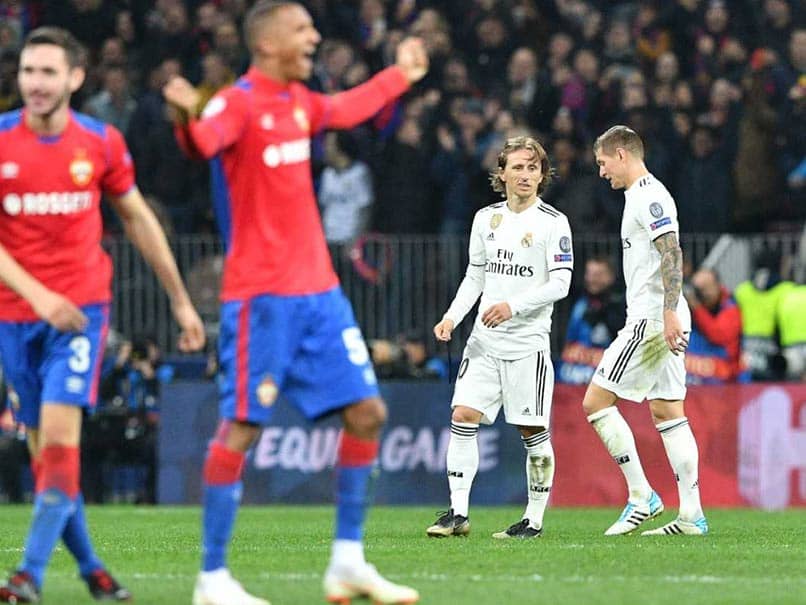 Toni Kroos' mistake proved costly as Real Madrid's goalscoring problems continued on Tuesday with a surprise 1-0 defeat to CSKA Moscow in the Champions League. Gareth Bale and Sergio Ramos were among a number of key players missing at the Luzhniki Stadium but it was Kroos' dreadful backpass that allowed Nikola Vlasic, on loan from Premier League Everton, to put CSKA ahead after just 68 seconds. Madrid searched for an equaliser but, despite hitting the woodwork three times, were resisted by a determined CSKA defence. The reigning European champions have now failed to score in three consecutive matches.

CSKA's veteran goalkeeper Igor Akinfeev was sent off deep into added time after picking up two yellow cards for dissent but nothing could spoil the hosts' victory which lifted them above Madrid in Group G.

Julen Lopetegui's side lacked spark, thrust and cutting edge in attack. They missed Bale, Isco and, perhaps even, the lethal touch of Cristiano Ronaldo.

"Goals come when you keep creating chances and believe you will be more accurate," Lopetegui said.

"That is all we can do. I am sure we will soon be scoring again and winning again."

Some of the changes were enforced, with Isco and Marcelo out injured, but Bale and Ramos were left at home to rest and Luka Modric started on the bench.

Keylor Navas came in for Thibaut Courtois in goal to continue Lopetegui's policy of one in La Liga and the other in Europe.

The absence of the established names meant a youthful line-up, which included a debut for 21-year-old left-back Sergio Reguilon, who joined the club's academy aged eight.

"It seems Carvajal has a small injury in his calf, we will have to wait on the tests," Lopetegui said.

Madrid were three down by half-time against Sevilla last week and this time they were behind within two minutes.

It was self-inflicted as Kroos tried to half-volley a bouncing ball back to Navas but Vlasic read it and intercepted. Raphael Varane was slow to react and the weaving forward finished into the corner.

CSKA coach Viktor Goncharenko said biggest concern was that his players would slump after the high of a remarkable victory.

"We played aggressively, boldly, we defended really well. Of course, an early goal helped us a lot," he said.

"Now we will all enjoy the evening. I'm afraid my players' emotions will come down after this win. Hopefully, because they are young they will survive it without any serious damage."

Madrid hardly troubled CSKA during the first half, despite Casemiro's long-range shot clipping the outside of the post and Karim Benzema's header plopping off the top of the crossbar.

Mariano Diaz and Modric finally came on for Casemiro and Vazquez shortly before the hour but even FIFA's best player in the world was unable to engineer any penetration through midfield.

The hapless Benzema dragged a shot on the turn and Ceballos had a deflected effort pushed wide by Akinfeev, who was shown two yellow cards for dissent in the dying moments.

Mariano headed Ceballos' cross onto the post for one final chance but Madrid could hardly complain.

CSKA Moscow Toni Kroos Football
Get the latest updates on IPL 2021, IPL Points Table , IPL Schedule 2021 , live score . Like us on Facebook or follow us on Twitter for more sports updates. You can also download the NDTV Cricket app for Android or iOS.