Handily for Mourinho it was Albiol who got Madrid off to the perfect start as he got on the end of Luka Modric's corner to turn in his first league goal in four years with the club. 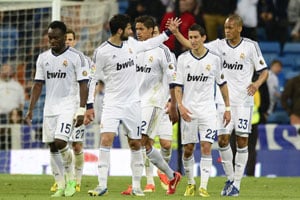 Real Madrid once again ensured Barcelona will have to wait a few more days before sealing the La Liga title as they beat nine-man Malaga 6-2 in a wildly open game at the Santiago Bernabeu.

With any form of Madrid slip up mathematically handing Barca the title, Pepe's name was the big absence from Jose Mourinho's starting line-up as despite an injury to Sergio Ramos, the Portuguese international was not even named on the bench after his outspoken comments that Mourinho ought to have more respect for captain Iker Casillas.

His absence meant a rare start for Raul Albiol and afterwards the Spanish international became the latest person from within the camp to call for unity between now and the end of the season.

"Pepe's absence in the squad is the decision of the manager," Albiol told Canal Plus.

"What we have to do is work and be united. We have three weeks left until the end of the season and we need to work until the end.

"We wanted to win, above all for the fans. We owed it to them. We were good, I think that the sending-off has favoured us, but we took the three points which is the important thing."

Handily for Mourinho it was Albiol who got Madrid off to the perfect start as he got on the end of Luka Modric's corner to turn in his first league goal in four years with the club.

The lead only lasted 13 minutes though as from Isco's corner at the other end, Diego Lugano headed the ball down and an unmarked Roque Santa Cruz side-footed home at the back post.

Cristiano Ronaldo then prodded wide a great chance after an excellent reverse ball from Modric and saw another effort from point-blank range blocked by Willy Caballero.

However, the former Manchester United man's insatiable running took him in behind the Malaga defence once more on 21 minutes and when he was pulled to the ground by Sergio Sanchez, the referee had little option but to award the penalty and show the Malaga defender a straight red card.

Caballero did excellently to block the ensuing spot-kick with his trailing leg, but Madrid were back in front just four minutes later in slightly bizarre circumstances.

Ignacio Camacho was adjudged to have deliberately played the ball back to Caballero after the Argentine pounced on it just outside his six-yard box.

The Malaga players and goalkeeper all then seemed to guard the near post from the resulting free-kick allowing Xabi Alonso to set-up Ronaldo to fire into a huge space in the opposite side of the goal.

Mesut Ozil then added the third at the end of a flowing counter-attack after being released by a fantastic pass by Ronaldo, but Malaga were given a lifeline when Vitorino Artunes also scored a fine goal as he cut inside and curled into Diego Lopez's top left-hand corner.

An increasingly disjointed first-half still had one more goal in it though as two minutes before the break three Madrid players were allowed to bear down on the Malaga goal and Ronaldo squared for Karim Benzema to roll into an empty net.

Unsurprisingly the pace and number of chances dropped after the break, but there were still two more sublime strikes to come from Madrid as firstly Modric cracked a shot in off the inside of the post from 25 yards just after the hour mark.

Malaga's miserable evening continued when Martin Demichelis received a second yellow card 17 minutes from time and Angel Di Maria struck the final blow in stoppage time as his effort curled into the far corner from just outside the area.

Earlier in the evening Atletico Madrid guaranteed they will play Champions League football next season with a 3-1 win over Celta Vigo.

Diego Costa, Juanfran and Radamel Falcao got the goals for Diego Simeone's side which leaves Celta still rooted in the relegation zone.