Real Madrid beat Atletico Madrid via penalty a shoot-out at San Siro on Saturday night to win the Champions League title for a record 11th time. 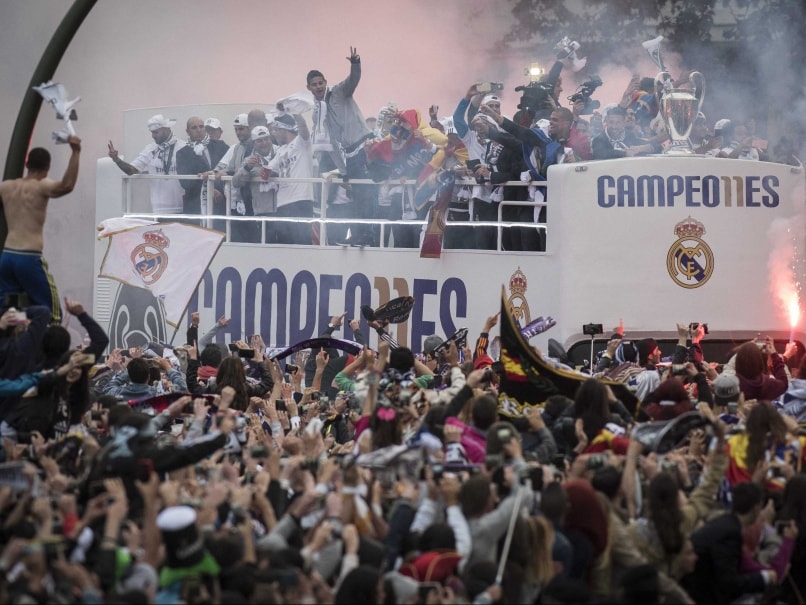 An open top bus emblazoned with the word "Campeones" (Champions) carried the team, which showed off the trophy to fans who had spent hours awaiting their heroes in the heart of the city.© AFP

Thousands of Real Madrid fans chanted and waved supporter scarves under a rain of confetti on Sunday in the Spanish capital as the team returned home after their historic 11th European Cup win.

"How can I not love you!," shouted the ecstatic crowd at the Plaza de Cibeles -- a traditional meeting point for Real's trophy celebrations.

An open top bus emblazoned with the word "Campeones" (Champions) carried the team, which showed off the trophy to fans who had spent hours awaiting their heroes in the heart of the city.

It is the second time in three years that Real have defeated Atletico in the final.

The players snapped photos of the raucous crowd from a platform specially erected at Cibeles, and team captain Sergio Ramos waved the large silver trophy for the cheering supporters.

At Real's Santiago Bernabeu stadium around 50,000 supporters had followed the action from the tense final on four giant television screens.

The Real Madrid players, who arrived home from Milan around 6:00 am (0400 GMT), headed directly for Cibeles where the fans had been celebrating since midnight.

The football-mad Spanish capital of 3.2 million people had been dominated by the two clubs crests and colours in a frenzied build-up to the final, which was expected to attract a worldwide audience of 180 million people in over 200 countries.

"Epic final in the League of Champions," he tweeted. "Congratulations to all... for the 11th."

Another public celebration with the team is planned for Sunday night in their stadium, which will follow a reception with city leaders.

"I am delighted. Two Champions League titles in three years, it is incredible," said Monica Gonzalez, a 25-year-old Real fan.

"They (Atletico) deserved it. They almost played better. I am happy my team won, but it could have been any of the two teams."

However, Gonzalez's boyfriend Jaime de Francisco, an Atletico fan, couldn't hide his disappointment as once again the red and white half of Madrid was forced to life in Real's shadow.

Just 500 metres (yards) away from wild scenes of celebration at Cibeles, the Neptuno fountain -- where Atletico fans go to celebrate their triumphs -- was empty.

Spanish daily sports newspaper Marca captured the mood, describing Real as "the king of Europe", adding that manager Zinedine Zidane had been "touched by a magic wand".

"He was born to play for Real Madrid... and to lead them," wrote the paper.

"A supreme derby, exhausting, stifling," wrote the AS sports newspaper.

Spain's bestselling El Pais newspaper described the final as "unforgettable and gruelling", with an editorial arguing that Atletico have nothing to regret, saying that they were "far superior at the start, (and) must be gritting their teeth".

Comments
Topics mentioned in this article
Real Madrid Atletico Madrid Sergio Ramos Cristiano Ronaldo Fernando Torres Karim Benzema Football
Get the latest updates on IPL Auction 2023 and check out  IPL 2023 and Live Cricket Score. Like us on Facebook or follow us on Twitter for more sports updates. You can also download the NDTV Cricket app for Android or iOS.