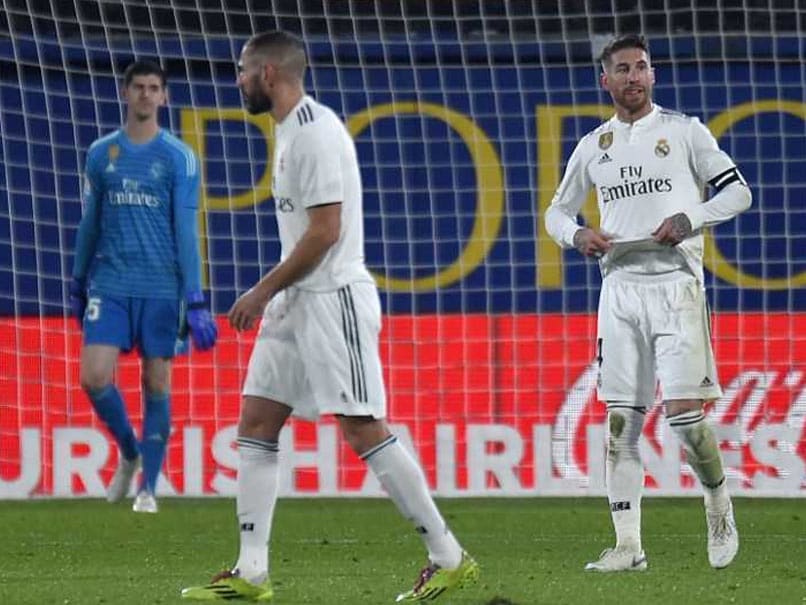 There might have been two clubs toasting Athletic Bilbao signing Ibai Gomez from Alaves on Thursday -- Athletic for one, but also Real Madrid. Few would expect the team that has won the Champions League three times in a row to be buoyed by a star player leaving Alaves, whose stadium holds just over 19,000 and who, five years ago, finished 18th in the second tier. But currently it is Alaves who stand between Madrid and La Liga's top four. Real missing out seems unthinkable, and for now it remains unlikely, but as their title hopes fade, priorities will adjust too.

The expectation is Alaves' remarkable form will at some point drift, particularly now Gomez has gone, his departure to a team placed 17th suggesting he too believed the surge may not last.

This, however, is where Real are now, fifth in the table, 10 points behind Barcelona, playing catch-up not just for first place but fourth. And there is a possibility the gap could widen through a run of tricky fixtures this month.

First, a trip on Sunday to Betis, who sit one place lower in sixth and have ambitions of their own to claim a European position. Then come third-placed Sevilla, eighth-placed Espanyol and Alaves.

Santiago Solari would have been encouraged by the 3-0 win over Leganes in the Copa del Rey on Wednesday, when Vinicius Junior, in particular, shone.

The 18-year-old's sumptuous volley was a demonstration of the sort of youthful exuberance a struggling team can rally around.

"He is taking big steps," Solari said afterwards. "We were angry and we let loose," added Nacho.

But in La Liga, Madrid head to the Benito Villamarin on the back of a defeat against Real Sociedad and a draw with Villarreal.

Fewer than nine weeks on from his appointment, Solari has already fielded questions about his future and Jose Mourinho's availability adds an extra layer of intrigue. Fall further away from the top four and those questions will become more frequent.

There is still plenty of time for recovery. Twelve months ago, the knives were sharpening for Zinedine Zidane too after Madrid lost to Leganes in the Copa del Rey.

Success in Europe made up for everything, even finishing 17 points worse off in the league than champions Barcelona.

The coach has changed twice since, but the team has largely remained, save for the departure of Cristiano Ronaldo and his La Liga average of 34.5 goals per season.

Gareth Bale was expected to step up, only for injuries, again, to disrupt his rhythm. Isco has been sidelined by Solari, failing even to make it into a rotated line-up against Leganes. "The situation is complicated," said Sergio Ramos on Wednesday.

Marcelo has been woefully out of sorts. Thibaut Courtois, Marco Asensio and Toni Kroos are injured.

It will take guts, and perhaps a run in the side for Vinicius, to spark Madrid into life, with the unpredictable Betis offering no guarantees -- this season, they have beaten two of the top three and lost to two of the bottom three as well.

Meanwhile, Sevilla travel to Bilbao, where Gomez is likely to make his debut on Sunday, and leaders Barcelona host Eibar.

Barca endured a surprise 1-2 defeat by Levante in the cup on Thursday but Philippe Coutinho's late penalty leaves them in touch heading into the second leg at home.

A much-changed line-up that excluded Lionel Messi, Luis Suarez and Marc Andre ter Stegen means confidence is unlikely to have been knocked.

Levante now face Atletico Madrid, who are five points behind the league leaders. For now, they are their closest challengers.

Atletico Madrid Football
Get the latest updates on ICC T20 Worldcup 2022, check out the Schedule and Live Score. Like us on Facebook or follow us on Twitter for more sports updates. You can also download the NDTV Cricket app for Android or iOS.