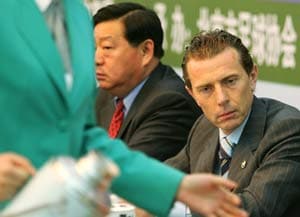 "The league is by no means over yet. There are many games left in the competition and the team will fight while there's still a chance," Butragueno, the club's director of institutional relations, told reporters.

"We've been finding it hard to score goals lately. We were more efficient at putting away our scoring opportunities a few months ago. We had four or five clear chances against La Coruna that normally would have resulted in goals.

"This is just a streak and we must go on," added the 47-year-old former Real and Spain striker who was nicknamed the 'Vulture'.

Real's outspoken coach Jose Mourinho slammed Spanish football's congested fixture schedule after his side were held to the goalless draw at Deportivo La Coruna on Saturday, saying "the schedulers are laughing behind my back".

"The people who told us to play on Saturday knew what they were doing. The team seemed tired. I will always defend the interests of my fans and Real Madrid. So I will keep saying the timing is wrong," Mourinho added.

Real had played Lyon in the first leg of their last-16 Champions League tie on Tuesday and Mourinho wanted the La Liga match against Deportivo rescheduled for Sunday to give his players an extra day's rest.

Asked about the coach's comments, Butragueno said Mourinho was not using the scheduling row "as an excuse" for the club's draw with Deportivo.

"It's just the reality of this situation and his point of view. He believes Real Madrid should be allowed more time to rest when they have midweek games," he added.

Comments
Topics mentioned in this article
Football Barcelona Real Madrid John Terry
Get the latest updates on ICC T20 Worldcup 2022 and CWG 2022 check out the Schedule, Live Score and Medals Tally. Like us on Facebook or follow us on Twitter for more sports updates. You can also download the NDTV Cricket app for Android or iOS.