In a break with FIFA tradition, the 2018 and 2022 tournaments were awarded at the same time, in 2010, leading to claims of horsetrading in the bidding process. 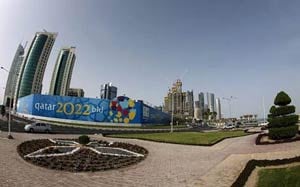 A representational photo of the FIFA World Cup which will be held in Qatar in 2022.

Qatar was "confident" it won the bid to host the 2022 World Cup with a "clean" record, a top organising committee official said on Thursday. (FIFA Clears Russia and Qatar)

"We were confident that any impartial investigation was to show that our record was clean and contains no irregularities," Hassan al-Thawadi, secretary-general of the Qatar 2022 organising committee told AFP.

"We were confident of ourselves and of the work we had done," added al-Thawadi, speaking in Riyadh where the Gulf Cup of Nations is taking place.

His remarks come after the ethics committee of world governing body FIFA ruled out in a report a revote into the controversial awarding of the 2022 World Cup to the tiny gas-rich state.

Even though the report had admitted there had been a series of worrying episodes in the bidding for the tournament, as well as the 2018 World Cup in Russia, it said there was not enough evidence to justify reopening the process.

In a break with FIFA tradition, the 2018 and 2022 tournaments were awarded at the same time, in 2010, leading to claims of horsetrading in the bidding process.

As concerns grew, FIFA appointed Michael Garcia, a former US federal prosecutor, to head up the inquiry into the 2018 and 2022 tournaments.

His 350-page report was handed to FIFA on September 5.

It summed up a year-long investigation that involved interviewing more than 75 witnesses and compiling a dossier with more than 200,000 pages and audio interviews.

The main controversy revolved around Qatar and how it was awarded the 2022 competition which was initially to be played in the summer when temperatures reach the upper-40s Celsius.

It also considered claims by international labour organisations that working conditions for migrant workers employed in the construction of the stadia were less than satisfactory.

Amnesty International on Wednesday criticised "woefully insufficient" steps taken by Qatar so far to end abuses of migrant workers in the Gulf country.

Despite Qatar escaping a revote, Thursday's ethics committee report still raised serious concerns over its campaign. The report again probed the role of Qatari Mohammed bin Hammam, a former member of the FIFA executive committee who was banned from all football activity in 2012.

In June Britain's Sunday Times alleged that bin Hammam paid more than $5 million to officials around the world before the 2010 vote to drum up support for the tiny Gulf state.

However, the report states that payments were designed to bolster his bid for the FIFA presidency in 2011 rather than to manipulate Qatar's 2022 World Cup hopes.

Comments
Topics mentioned in this article
FIFA Football
Get the latest updates on IPL 2021, IPL Points Table , IPL Schedule 2021 , live score . Like us on Facebook or follow us on Twitter for more sports updates. You can also download the NDTV Cricket app for Android or iOS.