Prince Ali Bin Al Hussein is of the view that FIFA can emerge from this difficult period with its reputation restored and become an organisation that is once again viewed with respect. 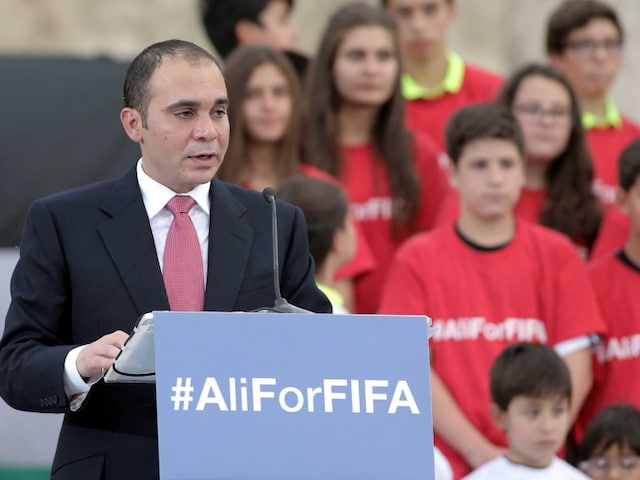 Jordans Prince Ali bin Al Hussein believes that this time of crisis at FIFA is an opportunity for positive change.© AFP

The election to replace departing leader Sepp Blatter is currently scheduled for February 26 but FIFA is discussing delaying it with its executive committee holding a crisis meeting on Sunday at its headquarters in Zurich.

Blatter and UEFA boss Michel Platini, who also hopes to take the top job, were suspended by FIFA's Ethics Committee last week. FIFA is engulfed by corruption claims and facing criminal investigations in Switzerland and the United States.

"This time of crisis at FIFA is an opportunity for positive change," Prince Ali said in a statement. "Many good ideas have emerged in the current discussion over FIFA's future.

"A better future will only come if ideas turn into action -- and that will only happen if FIFA has the right leadership.

"I am confident that FIFA can emerge from this difficult period with its reputation restored and become an organisation that is once again viewed with respect."

A 2011 payment of two million Swiss francs ($2.1 million) from FIFA to Frenchman Platini is part of a Swiss criminal investigation into Blatter, according to Swiss judicial authorities.

UEFA boss Platini has said the payment was for his work under contract for FIFA as an advisor to Swiss-born Blatter between 1999 and 2002, and the nine-year payment delay was due to FIFA's financial situation. Both men have denied any wrongdoing.

A delay in the election of a new president would give Platini more time to appeal against his 90-day provisional ban and stay in the race for the presidency. The ban, together with a possible 45-day extension and the length of any appeals process, are seen as major obstacles to his campaign.

Without Platini in the field, Ali's chances of winning could rise significantly. As it stands, the deadline for nominations is Oct. 26 and prospective candidates face a FIFA integrity check.

The prince, supported at the time by Platini, lost to Blatter in May's presidential election. But Blatter announced four days later that he would lay down his mandate as the corruption crisis engulfed FIFA.