Alex Ferguson's emotional return to Manchester United for the first time since his life-saving surgery was spoiled as Wolves snatched a 1-1 draw at Old Trafford on Saturday. 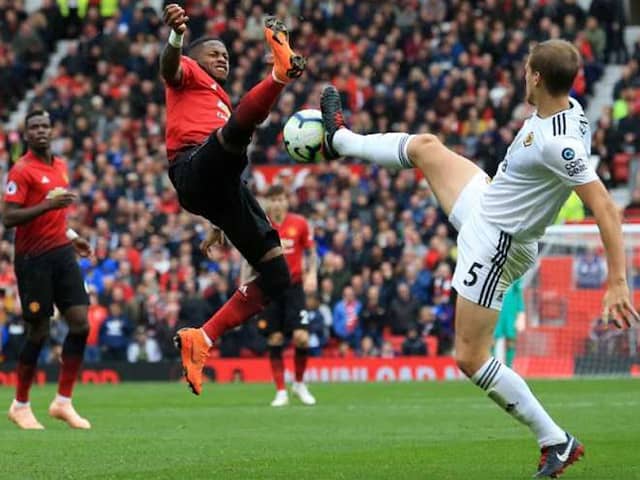 Wolves snatched a 1-1 draw at Old Trafford on Saturday.© AFP

Alex Ferguson's emotional return to Manchester United for the first time since his life-saving surgery was spoiled as Wolves snatched a 1-1 draw at Old Trafford on Saturday. United manager Jose Mourinho had boasted of his team's defensive improvements following a strong start to September in which his side had won all three of their games in the league and Europe. But his Portuguese compatriot Nuno Espirito Santo came close to masterminding Wolves' first Old Trafford victory for 38 years as Joao Moutinho earned the visitors a deserved point with his first goal since his pre-season move from Monaco.

It was a frustrating result that spoiled the script for legendary former United boss Ferguson, who was given a warm welcome by both sets of supporters when he took his seat in the directors' box before kick-off.

It was Ferguson's first public appearance at Old Trafford since he suffered a brain haemorrhage in early May and he was on hand to see Brazilian international Fred score his first goal for the club since signing for £52 million ($68 million, 58 million euros) from Shakhtar Donetsk in the summer.

Fred opened the scoring after 18 minutes, with a goal that owed everything to a selfless and clever assist from team-mate Paul Pogba.

The French international touched the ball to his team-mate skilfully, after he collected Conor Coady's headed clearance from an Alexis Sanchez cross, and Fred deposited an unstoppable 18-yard shot into the Wolves goal.

But, by the time they equalised seven minutes into the second half, Nuno's team was good value for a goal, even if it owed much to poor United defending.

Pogba gave the ball away needlessly in midfield, leading to an attack in which Helder Costa beat Luke Shaw far too easily on the United byline.

His cross found Raul Jimenez who laid the ball off for Moutinho to net with a lethal left-foot finish from the edge of the area.

The lack of organisation, and basic defensive principles, was a flashback to August when United conceded three in successive defeats, to Brighton and Tottenham.

Yet, despite United's strong recent run, Wolves looked capable of handing the home manager an unwanted first, with Mourinho seeking to avoid an impressive statistic of never having lost consecutive home league games throughout his managerial career.

Indeed, seconds before Fred opened the scoring, it required United goalkeeper David De Gea to keep the game scoreless with a magnificent, twisting save that kept out a powerful header from Coady as he sprinted in to meet Moutinho's corner.

There was also an impressive De Gea stop, with an outstretched leg, from Jimenez after the Mexican pivoted on the ball to connect with Costa's drag back.

United grew in confidence after scoring and it required an acrobatic diving save by Rui Patricio deep in first half injury-time to deny Fred a second goal, this from a left-foot free-kick.

The second half proved similarly open, especially after Wolves claimed their equaliser.

Costa's 25-yard shot flew over, Diogo Jota's effort was smothered by De Gea at the foot of his post and the United keeper gathered Ruben Neves's bouncing effort.

But, after throwing on Anthony Martial and Juan Mata as substitutes, United might have taken all three points with the better of the late chances.

Wolverhampton English Premier League Football
Get the latest Cricket news, check out the India cricket schedule, Cricket live score . Like us on Facebook or follow us on Twitter for more sports updates. You can also download the NDTV Cricket app for Android or iOS.