Poland inflicted a crushing defeat on 'reckless' Germany in their Euro 2016 qualifying match. This was Germany's first defeat in a qualifier for seven years. 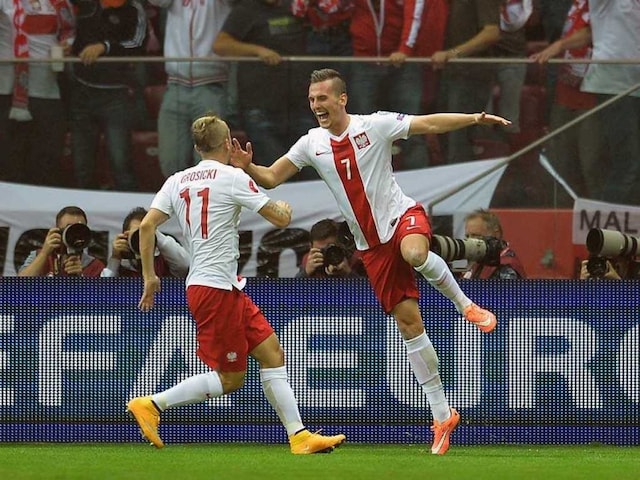 Poland stunned world champions Germany 2-0 in Warsaw on Saturday to claim an historic first victory over their neighbours who are now fourth in their Euro 2016 qualifying group.

Joachim Loew's Germany have the chance to get their campaign back on track when they host Martin O'Neill's Ireland in Gelsenkirchen on Tuesday, the same night Poland host Scotland.

"We are obviously disappointed, we were too reckless with our chances," admitted Loew.

"Our structure was good and we created a few opportunities, but Poland took their chances. We have to focus on Tuesday now, react well against Ireland and gather our strength."

Poland earned their maiden victory over Germany at the 19th attempt.

"We are delighted, you could see in the stadium that the supporters have been waiting a long time for this victory," said Poland defender Lukasz Piszczek.

"Our counter-attack game worked really well and we took our chances, that was the difference as the Germans didn't use theirs.

"It means a lot for the country, but we need to stay focused and concentrate on our next game on Tuesday."

The Germans had their impressive record of 33 qualifiers without defeat, dating back to a 3-0 defeat to the Czech Republic in October 2007, ended in abrupt fashion.

Their their last away loss in a qualifying match was a 3-0 defeat against Portugal in June 2000.

They stumbled again at Warsaw's National Stadium, the same venue where they lost the Euro 2012 semi-final to Italy.

Germany have struggled since winning the World Cup in Brazil in July.

They were humbled 4-2 by Argentina in an August friendly, then laboured to a 2-1 win over Scotland last month in their opening Euro 2016 qualifier.

"I came out late for the first goal, it was my mistake."

Even with retirements and injuries, Loew could still call on six of the side which started the World Cup final.

In Schweinsteiger's absence, Christoph Kramer partnered Toni Kroos in the defensive midfield with Mario Goetze played in the central attacking midfielder role with Thomas Mueller as a lone striker.

Having routed Gibraltar 7-0 in their previous qualifier, Poland made a confident start and Germany only enjoyed clear chances to test Poland's Arsenal goalkeeper Wojciech Szczesny towards the end of the first-half.

Bellarabi fired wide when he connected with Goetze's cross at the far post on 38 minutes, just before Mueller failed to finish his chance after a great run through the middle of the Polish defence.

The hosts took the lead when Borussia Dortmund's Lukasz Piszczek finished off a flowing attack and floated an inch-perfect pass over the German defence for Milik to put his header past Manuel Neuer.

The world champions raised the tempo in a bid to get back on level terms, but Poland also had their chances as Robert Lewandowski and Milik found space to attack as the Germans pressed forward.

But Mila settled the matter when he converted Lewandowski's pass just before the final whistle to the delight of the home fans.

Comments
Topics mentioned in this article
Germany Poland Arkadiusz Milik Football
Get the latest Cricket news, check out the India cricket schedule, Cricket live score . Like us on Facebook or follow us on Twitter for more sports updates. You can also download the NDTV Cricket app for Android or iOS.