Pierre-Emerick Aubameyang has now hit 28 goals for the season as Borussia Dortmund reached the last eight in Champions League for the first time since 2013/14. 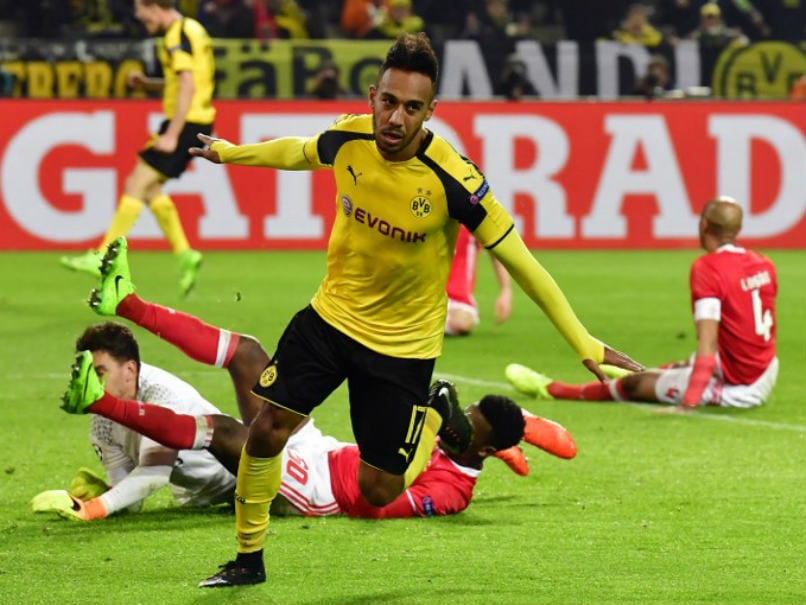 Pierre-Emerick Aubameyang has now hit 28 goals for the season for Borussia Dortmund.© AFP

A hat-trick by Pierre-Emerick Aubameyang and teenager Christian Pulisic's dazzling display fired Borussia Dortmund into the Champions League quarter-finals with a 4-0 thrashing of Benfica on Wednesday. The result saw Dortmund win the round-of-16 tie 4-1 on aggregate after Aubameyang's early goal cancelled out Borussia's 1-0 defeat in Lisbon last month. The Gabon hot-shot has now scored seven times in his last three games and has seven Champions League goals in as many matches this season, underlining his status as one of the most feared predators on the planet.

It was redemption for the striker, who had a night to forget in the first leg, missing four clear chances including a penalty in Portugal.

"That was the perfect time for 'Auba' to get his hat-trick," purred Dortmund coach Thomas Tuchel.

"It was a sensational performance. I love goals like his first one because they need such good timing and Auba is always there with his nose for goal."

Red-hot Aubameyang has now hit 28 goals for the season as Dortmund reached the last eight in Europe for the first time since 2013/14.

But it fell to US international Pulisic, who only turns 19 in September, to net the Germans' crucial second on 59 minutes, which put Dortmund ahead for the first time on aggregate.

"We had a great start, then we lost our way after 25 minutes, but the second half was a top performance," added Tuchel.

"We didn't want to let the first-leg defeat annoy us, now we are in the last eight and we want to go further."

Ousmane Dembele's corner was flicked on by Pulisic to Aubameyang, who headed home at the far post to delight the sell-out Signal Iduna Park crowd.

After a strong start from the hosts Benfica clawed their way back with captain Luisao heading straight at Dortmund goalkeeper Roman Burki from a free-kick midway through the half.

Dembele showed his youth, needlessly picking up a booking from English referee Martin Atkinson late in the first half for bitterly complaining after conceding a free-kick with a push on Andreas Samaris.

Benfica grew in confidence as the half wore on and Dortmund's defence wobbled, but it finished 1-0 at the break.

Dortmund had a big let-off soon after when Lukasz Piszczek failed with a clearance, which Franco Cervi snapped up on the edge of the box, but his shot was blocked.

Aubameyang then squandered three golden chances at close range before Pulisic made his decisive impact.

The US starlet chipped his shot over the advancing Ederson on 59 minutes after Piszczek's superb pass into the area.

He hit his third goal of the night -- sealing his first hat-trick in Europe's top competition -- on 85 minutes when Erik Durm's run and cross from the right handed him a simple tap-in.

It ensured more German pain for Benfica, now with 15 defeats in 23 European games away to Bundesliga clubs.

"We had chances and didn't take them," said Benfica defender Nelson Semedo.

"It was hard to turn things around after going behind.

"We were facing a great team with fantastic attacking ability so now it's now time for us to focus on our domestic league."

Comments
Topics mentioned in this article
Borussia Dortmund Benfica Pierre-Emerick Aubameyang Football
Get the latest updates on IPL Auction 2023 and check out  IPL 2023 and Live Cricket Score. Like us on Facebook or follow us on Twitter for more sports updates. You can also download the NDTV Cricket app for Android or iOS.