Striker Paolo Guerrero scored three goals and set up another on Saturday as Peru defeated Venezuela 4-1 to finish third in the Copa America. 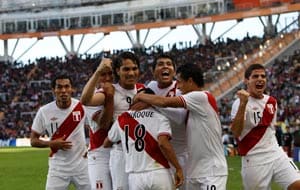 Striker Paolo Guerrero scored three goals and set up another on Saturday as Peru defeated Venezuela 4-1 to finish third in the Copa America.

Guerrero set up William Chiroque's goal in the 42nd minute, then got his hat trick with goals in the 64th, 89th and two minutes into stoppage time.

"I have to help the team and my job as a striker is to score goals," Guerrero said. "I got help from everyone and thank God I got the three goals."

Venezuela pulled one back through Juan Fernando Arango in the 77th, but it could not overcome going a man down in the 58th when midfielder Tomas Rincon was sent off for a hard sliding tackle.

"We are happy, but we know it doesn't mean much, we haven't won anything," Peru's Uruguayan coach Sergio Markarian said.

Uruguay and Paraguay will play the final on Sunday. Host Argentina and defending champion Brazil were eliminated in the quarterfinals of the South American competition.

The fourth-place finish remains Venezuela's best result in the Copa America. Its surprising run ended with a loss on penalties to Paraguay in the semifinals. Saturday's defeat marked the team's only loss in regulation in the tournament.

"Peru was a great team and it deserved the victory," Venezuelan coach Cesar Farias said. "Venezuela gave all it had and it was unfortunate that we couldn't take advantage of our scoring opportunities."

Peru, which was the worst team in South American World Cup qualifying just a year ago, was the other surprise of the South American championship. It finished third despite the absence of its top two forwards, Jefferson Farfan and Claudio Pizarro.

"This is a very important result for Peru," defensive midfielder Rinaldo Cruzado said. "It's a third-place finish that nobody thought we could get."

Peru lost 2-0 to Uruguay in the semifinals.

Venezuela created some of the most dangerous scoring opportunities throughout the match but Peru capitalized on its chances on counterattacks. Peru only became more dominant after Rincon received a straight red card for a sliding tackle with his feet first on Peru's Carlos Lobaton, who had to leave the match with an injury.

Chiroque opened the scoring on a counterattack just before halftime. He fed the ball to Guerrero on the right and rushed into the area to meet the cross, easily finding the open net with a left-footed shot.

A similar move led to the second Peruvian goal, but this time it was Chiroque who made the pass for Guerrero's hard shot into the top of the net from close range.

Venezuela pulled one back with Arango's left-footed shot from near the penalty spot, and he almost equalized in the 81st with a free kick saved by Peru goalkeeper Raul Fernandez.

The goals made Guerrero the tournament's leading scorer with five, two more than Uruguay's Luis Suarez and Argentina's Sergio Aguero. Guerrero had also scored Peru's winner against Mexico in the group stage.

Comments
Topics mentioned in this article
Football Paolo Guerrero Neymar Chile Brazil Hamburger SV Venezuela Peru Uruguay
Get the latest updates on IND vs NZ 2021, check out the Schedule and Live Score . Like us on Facebook or follow us on Twitter for more sports updates. You can also download the NDTV Cricket app for Android or iOS.