Bayern Munich ran riot in a 7-0 romp at Werder Bremen on Saturday with France winger Franck Ribery creating two goals and scoring twice to boost his claim for the 2013 world footballer of the year award to be announced on January 13. 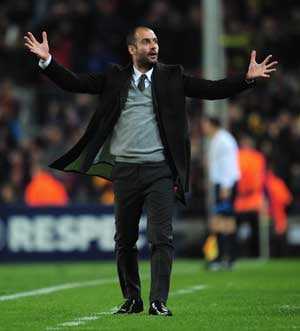 Pep Guardiola admitted he was 'honoured' to coach Bayern Munich as they extended their record unbeaten Bundesliga run to 40 matches, while Borussia Dortmund's injury woes worsened.

Bayern ran riot in a 7-0 romp at Werder Bremen on Saturday with France winger Franck Ribery creating two goals and scoring twice to boost his claim for the 2013 world footballer of the year award to be announced on January 13.

"It was an honour to coach them today, but I know Bremen can play much better than that," said Guardiola as his team posted their biggest win since he took charge in June.

"I must say a big thank you to my team, they played very, very well."

Having won 14 trophies in four years as Barcelona coach, Guardiola can win his second piece of silverware with Bayern later this month in the Club World Cup in Morocco having won the UEFA Super Cup in August.

Bayern have already reached the knock-out stages, but warmed up for Tuesday's Champions League match at home to Manchester City, when they hope to extend their record European winning streak to 11 victories.

"This team has a great mentality, it makes it fun to play," said Ribery, making his first start for a month after a rib injury.

"But we must keep playing at this level."

Bayern, who last lost in the German league in October 2012, cut Bremen's defence to tatters.

Belgium's Daniel van Buyten, Croatia's Mario Mandzukic plus Germany's Thomas Mueller and Mario Goetze all got on the scoresheet after Bremen scored an own goal.

The victory was just short of the Bundesliga's 57-year-old record of 9-0 for an away win and was Werder's heaviest home league defeat.

Bremen coach Robin Dutt kept the team on the pitch for a stern lecture as they dropped to 14th after just two wins in their last 10 games.

"I am especially pleased for the team," said Leverkusen coach Sami Hyypia, whose side must beat Real Sociedad on Tuesday, and hope Shakhtar Donetsk lose at Manchester United, to reach the last 16 of the Champions League.

"In the first-half, we really showed what's possible.

"After the break, we fought hard and we won, the victory was important because Dortmund were only three points behind us (before the match)."

South Korea striker Son Heung-Min hit the 18th-minute winner after Leverkusen's attack pounced on a mistake by Dortmund defender Manuel Friedrich for Son to score his fifth goal in his last three games against Borussia.

"It's never easy to win at Dortmund and we gave it everything," said Son.

Both sides finished with 10 men as Leverkusen had Bosnia defender Emir Spahic sent off for striking Dortmund's Henrikh Mkhitaryan while Borussia had Greece centre-back Sokratis dismissed late on for a second bookable foul.

Dortmund had both midfielders Sven Bender and Nuri Sahin taken off with ankle injuries and are doubtful ahead of Wednesday's Champions League game at Marseille, which Dortmund must win to reach the knock-out stages.

"We didn't play well, we didn't find our way into the game, while Leverkusen did with their aggressiveness.

"We played with more passion in the second half, but we still weren't good.

"Then we picked up more bloody stupid injuries, which is very annoying."

Comments
Topics mentioned in this article
Football Bayern Munchen Borussia Dortmund Barcelona Shinji Okazaki Lionel Messi
Get the latest updates on ICC T20 Worldcup 2022, check out the Schedule and Live Score. Like us on Facebook or follow us on Twitter for more sports updates. You can also download the NDTV Cricket app for Android or iOS.