Edison Flores scored the decisive penalty as Peru qualified for the semi-finals for the third time in the last four editions of Copa America. 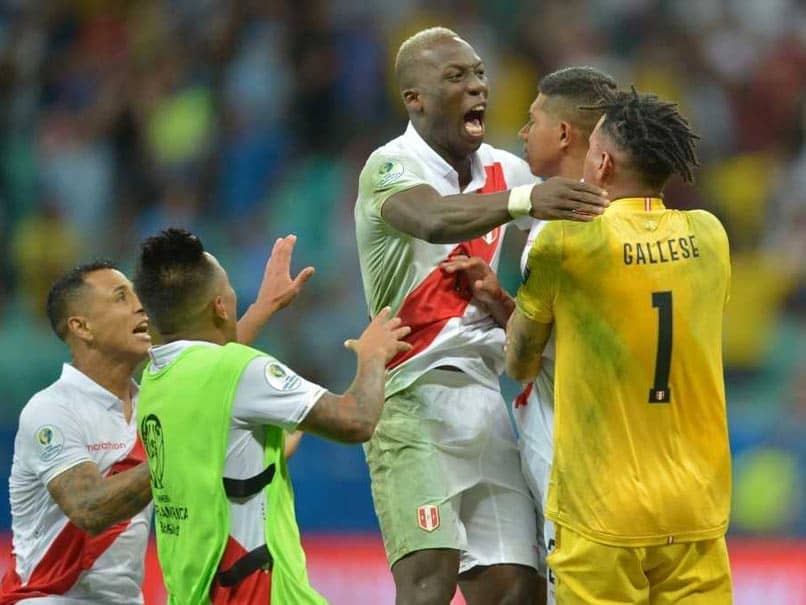 Goalkeeper Pedro Gallese saved Luis Suarez's spot-kick as Peru beat Uruguay on penalties on Saturday to reach the Copa America semi-finals, where they will face Chile. Edison Flores scored the decisive penalty as Peru, who were thrashed 5-0 by Brazil in their previous match, qualified for the semi-finals for the third time in the last four editions of the Copa. It was a remarkable turnaround for Gallese, who was the villain of that thumping by the hosts, gifting Brazil their second goal by clearing the ball straight to Roberto Firmino, while he was also partially at fault for the first and third scores.

But in Salvador he guessed the right way for the first shoot-out penalty to deny Barcelona forward Suarez, after which Peru's own penalty-takers were faultless.

"A lot of people said we don't have the fortitude and guts. But we showed today on the pitch that we could take them on head-on.

"Peru has hunger, Peru is a warrior, Peru has guts."

It was the third Copa quarter-final to finish goalless and head to penalties after Uruguay had three goals ruled out for offside during normal time.

Giorgian de Arrascaeta, Edinson Cavani and Suarez had all put the ball in the net, only to be denied by a linesman's flag.

"It's a bitter and sad feeling. We had high hopes to qualify, but simply couldn't," said Uruguay's captain Diego Godin.

"We lacked a goal. We tried, we looked for it... (But) three were disallowed."

Brazil beat Paraguay on spot-kicks on Thursday and champions Chile did likewise to knock-out Colombia on Friday.

In the only match to feature any goals, Argentina defeated Venezuela 2-0 on Friday.

Peru will face Chile in the second semi-final in Porto Alegre on Wednesday, a day after hosts Brazil take on Argentina in Belo Horizonte.

After a slow opening, Uruguay burst into life on 15 minutes when Federico Valverde surged onto a loose Peru pass in their own half and picked out an unmarked Luis Suarez on the penalty spot, but the Barcelona forward couldn't keep down his header.

Two minutes later Nahitan Nandez broke into the box from the flank but his shot was blocked by a sliding defender.

In pouring rain, Uruguay looked set to take the lead on 24 minutes with a rapier counter-attack, but Cavani ballooned the ball into the sky from six yards after Gallese parried Suarez's shot, although it wouldn't have counted as the Barcelona forward was retroactively deemed offside when he received the ball.

De Arrascaeta had the ball in the net on 28 minutes but that was chalked off for an offside against Nandez.

Peru finally created a worthy chance late in the first half but Jose Gimenez made a stunning recovery tackle to deny Guerrero a goalscoring chance.

Up the other end, Gallese made himself big to block Cavani's shot on the turn.

Gallese was called into action early in the second period to punch out a dipping Valverde free-kick.

Center-back Godin, up for a throw-in deep in Peruvian territory, emulated Cavani's first-half howler, spooning over from seven yards after he was picked out by Suarez.

Cavani appeared to have broken the deadlock just before the hour mark as he latched onto a Suarez through ball and chipped Gallese, but he was pulled up for offside.

Suarez poked home a Martin Caceres cross inside the six yard box on 73 minutes, but that too was ruled offside.

Uruguay pushed hard late on but Peru held out as Suarez failed to make contact with the ball when trying to lob Gallese in the clearest chance.

Uruguay Football
Get the latest updates on India vs England Series, India vs England , live score and IPL 2021 Auction . Like us on Facebook or follow us on Twitter for more sports updates. You can also download the NDTV Cricket app for Android or iOS.