Alexandre Pato scored his first goal in eleven months to give Italian football giants AC Milan a 1-1 draw with Malaga at home in a Champions League group game. 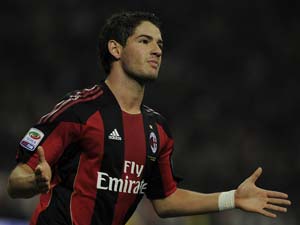 Alexandre Pato scored his first goal in eleven months to give Italian football giants AC Milan a 1-1 draw with Malaga at home in a Champions League group game.

Eliseu's goal put Malaga ahead in the first half, and Pato capitalised on fine work from Kevin Constant to register his first Milan goal since December last year and spoil Malaga's clean sheet in the competition, reports Xinhua.

"Pato was growing as time went on and this goal will help him to find confidence, as will the fact he played for 90 minutes with good intensity," he said.

"It was important to achieve qualification and especially in such a world famous stadium against a great team," he said.

"We spoke with the players and decided it was best to score the goal in the first half, then after the break we controlled well until Pato' s goal. We knew just what quality he has and what he can do.

"Milan were able to control the tempo of the game, but they did not create that many opportunities," he said.

Comments
Topics mentioned in this article
Football Sevilla Malaga Villarreal Leo Baptistao AC Milan Italy
Get the latest updates on IPL 2020, check out the IPL Schedule for 2020 and Indian Premier League (IPL) Cricket live score . Like us on Facebook or follow us on Twitter for more sports updates. You can also download the NDTV Cricket app for Android or iOS.