PSG coach Carlo Ancelotti praised his players for what he termed "a very good game" and suggested they had left a favourable mark on the competition. 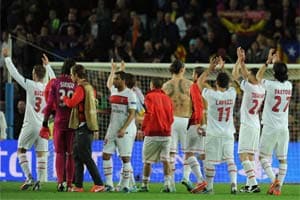 Paris Saint-Germain were hailed in the French press on Thursday for their valiant effort against Barcelona in the Champions League quarter-final.

After last week's first leg ended 2-2, PSG travelled to the Catalan giant's Camp Nou on Wednesday night with a semi-final berth there for the taking.

When Javier Pastore gave the French outsiders the lead after half time, an upset was on the cards, until Barca summoned Lionel Messi from the bench and Pedro fired home 19 minutes from time to level the tie 3-3 and put the Spaniards through on away goals.

"Promising," was how French sports daily L'Equipe summed up the performance of big-spending PSG, who miss out on the last four despite the considerable feat of not losing to the might of Messi and company.

"Paris so close to the dream," wrote Le Parisien daily.

"PSG achieved something at the Camp Nou but don't qualify for the Champions League semi-finals on a night when they were stronger than their hosts -- incredibly disappointing!" the paper stated.

"They flirted with paradise," L'Equipe noted, referring to the time between Pastore's goal and Pedro's equaliser when PSG were leading the tie 3-2.

"For over quarter of an hour PSG were qualified for the Champions League semi-finals. But Messi came on and hope disappeared.

"Aside from a couple of missed chances the club doesn't have much to regret., they leave the Champions League with honour and pride at having shaken one of the big favourites of the competition."

PSG coach Carlo Ancelotti praised his players for what he termed "a very good game" and suggested they had left a favourable mark on the competition.

"For me, this is my first full year at PSG and I'm happy with what my team has done in the Champions League," he said.

"We were competitive. Naturally we must be better next year.

"The most important thing we showed tonight was our identity -- to do that you have to work every day. We've played 10 matches and only lost one in the Champions League.

"The players are as disappointed as they are delighted at their display.

"Someone said we didn't deserve to lose, we don't have time to think about that, we've now got to do everything to win the remaining two competitions we're involved in (Ligue 1 and the French Cup).

"Next year our aim will be to be better."

The Spanish press not for the first time went to town on Messi's starring contribution, the world footballer of the year having lifted Barca's fortunes from the bench after suffering a hamstring injury in the first leg at the Parc des Princes.

"The Argentine came on, intimidated PSG and proved the joker for a lifeless Barca," was the verdict of El Mundo, while El Pais singled out the psychological lift the striker gave to his team.

"Useless to enter into lengthy debate on the 'Messidependence'. One day, Barca will even win a match with his effigy in stone or cardboard."

Comments
Topics mentioned in this article
Football AC Milan Marseille Paris SG Barcelona Javier Pastore Gareth Bale Lionel Messi Zlatan Ibrahimovic
Get the latest updates on India vs Australia Series, check out the India vs Australia Schedule for 2020-21 and Ind vs Aus live score . Like us on Facebook or follow us on Twitter for more sports updates. You can also download the NDTV Cricket app for Android or iOS.