Oleksandr Zinchenko says he wants to give Ukrainians something to smile about as his team prepares for next week's World Cup play-off semi-final against Scotland. 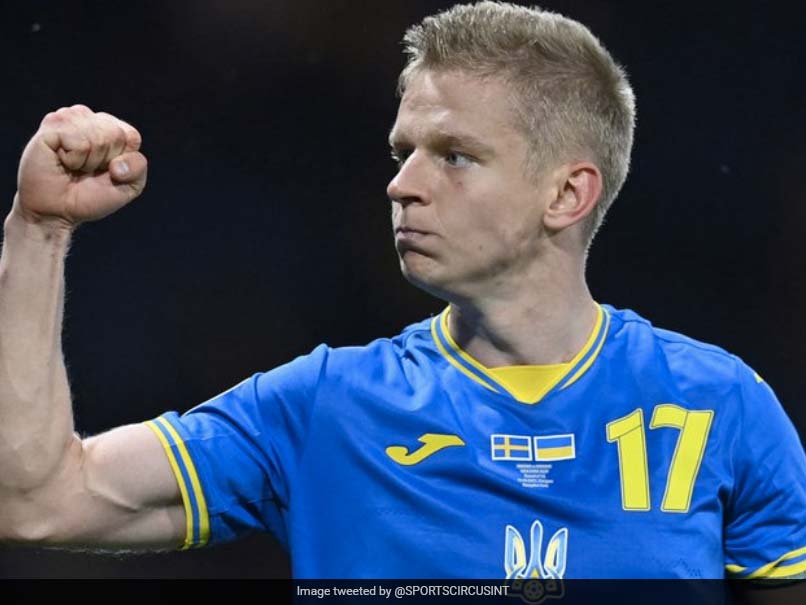 Oleksandr Zinchenko wants to give Ukrainians something to smile about.© Twitter

Oleksandr Zinchenko says he wants to give Ukrainians something to smile about as his team prepares for next week's World Cup play-off semi-final against Scotland. The match, taking place in Glasgow next Wednesday, was rescheduled from March after Russia's invasion of Ukraine. Ukraine are certain to earn the support of fans around the world in their first competitive match since the war started and Manchester City defender Zinchenko said he was "shaking inside" at the prospect.

"Ukraine is still alive," the 25-year-old defender told the BBC. "Ukraine is going to fight until the end. This is our mentality. We never give up.

"I'm so grateful and so thankful for all the support around the world. Scotland are such a good team. They have unbelievable fans.

"I can promise all the Ukrainian people that every one of us is going to give everything to win the game and to make them proud of us and just maybe for a few seconds we would like to give them this smile."

The left-back, who won the Premier League title with City last weekend, said it had been difficult to focus on football in the early weeks of the conflict.

"All my thoughts were with Ukraine, Ukrainian people. I would say for everyone, for every Ukrainian footballer, it was exactly the same," he said.

"This game is one of the most important games in my life. The guys look ready and it's not necessary to talk about motivation.

"The physical condition, obviously without the games, it's not easy to prepare yourself for the guys that haven't played for a while. In this case, there is no excuses and we have to do our job as best as we can."

Scotland are trying to qualify for the World Cup for the first time since 1998 while Ukraine have only appeared at the tournament once since they began playing as an independent nation, in 2006.

The winner of the match in Glasgow will face Wales in the play-off final in Cardiff on June 5.

Wales Olexandr Zinchenko Football
Get the latest updates on ICC T20 Worldcup 2022, check out the Schedule and Live Score. Like us on Facebook or follow us on Twitter for more sports updates. You can also download the NDTV Cricket app for Android or iOS.