No Messi means no chance for Arsenal 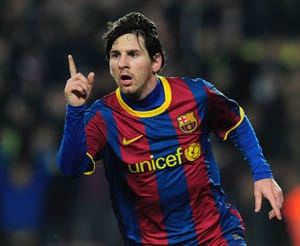 "He's our genius," said Dani Alves, nearly at a loss for words after a game in which Lionel Messi - yet again - led Barcelona to a crucial victory by impishly, instinctively, extraordinarily scoring the first of his two goals to break Arsenal in the Champions League.

"He isn't alone," Alves, the Brazilian right back, continued to tell reporters. "We all know Messi's surrounded by a great team. But he's on a superior level to everybody else.

"He pulls us through tough games, and he's done it again tonight." Hasn't he just.

"Messi?" responds another teammate, Pedro Rodriguez. "I'm all out of adjectives to describe his excellence." Well, let's see if we can help.

The clock was running down on a goalless first half when Arsenal's captain, Cesc Fabregas, himself a former Barcelona apprentice player, committed a fateful error.

Fabregas chose the wrong time and place to attempt a back-heel pass: right outside the Arsenal penalty area. Andres Iniesta read his intention, as well he might, given that they were schoolboys together in Barça's academy and played together when they won the World Cup last year.

In the blink of an eye, Iniesta intercepted the ball, and with maybe the shortest of the 871 passes with which his team overwhelmed Arsenal during its performance on Wednesday, he slipped it to Messi.

He rushed from his line, hurtled feet-first towards Messi. Too late: With a delicate little flick of his left foot, Messi lifted the ball over the sprawling keeper. With another touch, he volleyed it gracefully into the net.

And then the mob, Messi's team, was upon him. This, the players knew, was the goal that had turned the tide. Arsenal's narrow advantage, after it won the first of this two-match contest, was gone.

Arsenal would spoil the night with sour-grape excuses about the refereeing, specifically about the Swiss official Massimo Busacca's somewhat bossy decision to send off Robin van Persie six minutes into the second half.

Busacca had earlier yellow-carded van Persie for his repeated indiscipline in the first half. When van Persie shot into the crowd a second after the ref had whistled him offside, Busacca interpreted that as another act of petulance, or of time-wasting.

It was neither. Van Persie protested on the field that he had not heard the whistle. He, and his manager Arsene Wenger, complained bitterly to the match officials that, with 95,000 Catalans baying in the Camp Nou, it was unreasonable to sanction a player for not hearing the call.

The arbitration, claimed Wenger, was embarrassing to anyone who know the game or has played the game.

The real embarrassment was that Arsenal, the finest passing side in English soccer - perhaps of all time - was outplayed and outwitted so comprehensively in all aspects of the sport.

Statistics cannot reflect the beauty, and yes, the genius, afoot. But they do distinguish between the two sides on this occasion. To Barcelona's 871 passes, Arsenal had 288.

To Barcelona's 20 shots, Arsenal had none. The London team scored, by way of a goal headed into his own net by Barcelona's makeshift defender, Sergio Busquets. However, Arsenal created no threat of its own, and Barça's goalie, Victor Valdes, might as well have sat in the crowd, while Almunia performed heroics of defiance as Messi and Co. swarmed his net.

The final score, 3-1, came via a 71st-minute penalty kick, converted by you-know-who, and a 69th-minute masterpiece involving the trickery of Iniesta, the first-touch pass of David Villa, and the finish by Xavi Hernandez with a touch as deft as a pickpocket's.

It is sad, and sadly predictable, that Wenger should dwell on his perceived injustice of the night. The reality is that Arsenal very commendably tries to play Barcelona's sweet passing game in the ferociously combative English league - but plays it a long way second to Barça.

One of the keys is Messi's genius. Another is the work ethic that Messi, and all the rest of Barcelona's players, display. It is almost as if they enjoy running as much as they enjoy caressing the ball, and it is a built-in response, honed in the academy of La Masia, that the instant a Barça player loses possession, he, or the nearest player to the ball, hunts it down like a ferret.

I know of no player, past or present, who has witnessed a greater amalgam of talent and persistence throughout one team. "We played awesome when it was 11 against 11," Barcelona coach Pep Guardiola concluded. "We played awesome 11 against 10. I don't know if it would have been different had all the players stayed on the pitch, but the best team won."

Faint echoes of that came Wednesday from Ukraine, where Shakhtar Donetsk wiped out Roma, 3-0 on the night and 6-2 over the two games.

The Roman team, a goal down before its defender Philippe Mexes was sent off for two reckless tackles, fell to goals scored by Tomas Hubschman, the Brazilian Willian, and the Brazilian-Croatian, Eduardo.

Donetsk is known as the Miners. Its squad will never have seen a day down a mine. They are recruited from around the world and trained by Mircea Lucescu, a wily Romanian whose 32 years' coaching includes spells in Italy, which tell him what Italians like least: fast, vigorous, skilled young men running at them.

Not a Messi among them, but not by any stretch of imagination miners either.

Comments
Topics mentioned in this article
Football Arsenal Lionel Messi Barcelona
Get the latest updates on ICC T20 Worldcup 2022 and CWG 2022 check out the Schedule, Live Score and Medals Tally. Like us on Facebook or follow us on Twitter for more sports updates. You can also download the NDTV Cricket app for Android or iOS.