Brazil's Neymar Sidelined For Up To Three Months With Foot Surgery

Brazilian superstar Neymar will undergo surgery on his fractured foot in Brazil as early as Thursday, ruling the world's most expensive footballer out of Paris Saint-Germain's do-or-die Champions League clash with Real Madrid. 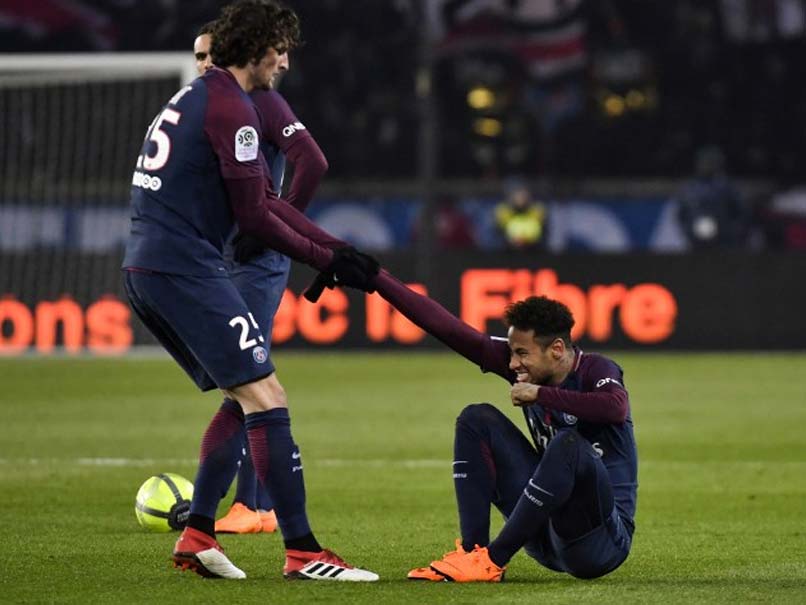 Brazilian superstar Neymar will undergo surgery on his fractured foot in Brazil on Thursday.© AFP

Brazilian superstar Neymar flew into Rio de Janeiro early Thursday ahead of an operation on his fractured foot that will sideline him for up to three months, casting a long shadow over Paris Saint-Germain and Brazil's World Cup preparations. The world's most expensive player, 26, arrived on an Air France flight from Paris and left in a wheelchair, a photo taken by one of his fellow passengers showed. Dressed in a black hoodie, a black baseball cap and wearing sunglasses, the PSG star smiled and took selfies with passengers, before leaving on a private jet to an undisclosed destination. Surgery is booked for Saturday, said national team surgeon Rodrigo Lasmar, who will lead the procedure.

But despite the hurry to put Neymar's right foot under the knife at a hospital in Belo Horizonte, he won't be back on the field soon.

"The (recovery) period will be around two and a half to three months," Lasmar told journalists after arriving with the player on the same Air France flight.

"It's not a simple fracture, but a fracture in an important bone in the middle of the foot," Lasmar said.

The injury has not only ruled Neymar out of PSG's do-or-die Champions League clash with Real Madrid on March 6, but now threatens the much fancied Brazilian national side's build-up to the World Cup, which starts in Russia on June 14.

- Tiny bone, big problem -
The initial prognosis did not appear quite as serious on Sunday, when Neymar suffered a hairline fracture of the fifth metatarsal, as well as a twisted ankle late in PSG's 3-0 win over Marseille in Ligue 1.

On Tuesday, the Brazilian's father Neymar Senior had claimed the player would be out for "at least six weeks".

PSG coach Unai Emery had said earlier that there remained a "small chance" of getting him back in time to face Real.

Lasmar's assessment painted a graver picture both in terms of the injury and the timing of Neymar's recovery.

"Yesterday we went back to the hospital (in Paris) and made new exams that left the seriousness of the fracture very clear," he told journalists in Rio.

"There was no doubt left regarding the treatment. We were unanimous in agreeing that it would have to be surgical treatment. More conservative treatment, without surgery, would present a far greater risk for refracture. We can't run that risk."

PSG lost 3-1 to Real in the first leg of their European tie in Spain two weeks ago and are in danger of being knocked out of the competition in the last 16 for the second season running.

The drama is also a big personal setback for Neymar who has been at the centre of the world's footballing attention since his 222 million-euro ($264 million) move from Barcelona last August.

He has scored 28 goals in 30 appearances in all competitions for PSG since arriving. But on Sunday he looked to be in tears as he was stretchered off the field at the Parc des Princes.

- Brazilian jitters -
Brazilians care little about the impact on PSG. Their attention is entirely trained on the World Cup, where they have ambitions of walking away with a sixth title.

"We just might have lost the World Cup last Sunday," one radio commentator, Milton Neves of Bandnews FM, said Wednesday.

Images of Sunday's fateful duel between Neymar and Marseille player Bouna Sarr were being shown incessantly on TV, often in slo-mo, before he was stretchered off.

"I don't think we can really talk about fears of him not being at the World Cup. But there is a noticeable haste to find a solution so that Neymar will have recovered in time," an ESPN Brasil sports commentator, Mauro Cezar Pereira, told AFP.

Lasmar said he was aware of the pressure.

"It's clear there are goals to reach in terms of timing and we will do our best to meet the deadlines," he said.

Comments
Topics mentioned in this article
Real Madrid Paris SG Neymar Football
Get the latest updates on IPL 2021, IPL Points Table , IPL Schedule 2021 , live score . Like us on Facebook or follow us on Twitter for more sports updates. You can also download the NDTV Cricket app for Android or iOS.